It is a topic we revisit often, but some things deserve repeating. While our Santa Cruz car accident lawyer is dedicated to representing people who are injured by another driver’s negligence, our firm believe prevention always comes first. Seatbelts are one of the best ways to prevent a collision from becoming a tragedy. We represent people when another driver was at-fault, regardless of whether our client wore a seatbelt, but that doesn’t change the fact that we encourage everyone to buckle up and be safe.

Two Teens Die in Santa Cruz Crash
Reporters with the Santa Cruz Sentinel recently covered a Highway 1 crash that killed two local teens an contributed to a back-up lasting more than six hours. It was just before 7 A.M. when a 15 year-old lost control of a Hyundai sedan, crossed over to oncoming traffic lanes and crashed head-on with a utility truck between Jensen and Salinas roads. The driver was ejected and landed in the middle of the two-lane roadway.

Neither the sedan’s driver nor her 18 year-old passenger were wearing their seatbelt. Both were pronounced dead at the accident scene. It is unclear if the driver had a learner’s permit (note: the law would allow a driver her age to have a permit, but she’d need a licensed companion aged 25 or older in the car). No one in the truck was hurt.

Seatbelt Statistics from the CDC 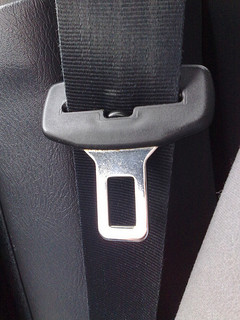 In January, the Centers for Disease Control (“CDC”) updated their policy brief focused on seatbelt usage, including important statistics. More than half (53%) of the 33,000 who died in vehicle accidents nationwide in 2009 were unrestrained. Seatbelts cut the risk of dying by 45% for drivers and front-seat passengers, cutting the risk of serious injury in half. A big part of the reason seatbelts save lives is they prevent ejection — more than 75% of those who are ejected in a crash will die and people who are not belted are 30 times more likely to be ejected during a crash.

Putting it fairly simply, the CDC says “Wearing a seat belt is the most effective way to prevent death and serious injury in a crash.” Both education and enforcement have helped lead to an increase in seatbelt usage in recent decades. Still, despite the fact that almost 13,000 lives were saved by seatbelts in 2009, 1 in 7 people still fail to buckle their seatbelts. The CDC estimates nearly 4,000 more lives could have been saved in 2009 if everyone buckled up.

A Reminder About Civil Liability
If our blog encourages just one more driver to buckle up, then every post we’ve written on seatbelt use will be worth it. While buckling up is always wise, we want to remind readers that forgetting to do so does not mean you “deserve” to be an injury victim. If you were injured or lost a loved one in an accident caused by another driver’s negligence, you may have a civil claim regardless of whether or not you (or your loved one) buckled up. The failure to wear a seatbelt may mean a reduced monetary recovery, but an “at fault” driver is still liable and a victim still has a civil claim.

Call our Northern California car accident attorney to discuss this issue or any other question about your legal rights after a crash.