Our Sacramento tenants’ rights law firm believes everyone is entitled to a home that is safe and livable. We think it is unfortunate when it takes an order from housing code enforcement officials or, worse yet, an order from a judge to make a landlord provide a safe dwelling. A story affecting some local renters reminds us, however, that sometimes it takes action to get results and get owners to fix an unsafe apartment. 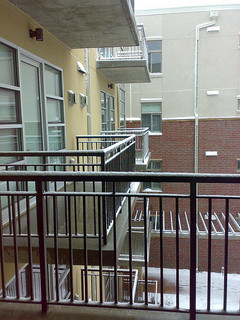 Officials in West Sacramento have, according to a Sacramento Bee report, intervened to force the owner of an apartment building to comply with building code requirements. City code enforcement officials told over a dozen residents at Hunter’s Point Apartments, an 80-unit complex located at 900 Todhunter Avenue, that they would need to stay elsewhere while work was performed on the balconies of certain upstairs units. Dry rot has eaten away support beams, leading officials to condemn a number of the structures and flag others needing attention. Charline Hamilton, the community development director for West Sacramento, said the damage may mean all ten balconies need to be replaced. Fifteen residents are temporarily living in unaffected units or at a nearby motel. Officials have called the balconies a top code enforcement priority.

A Prolonged Problem and a History of Violations
Sharma Holdings Co. of Sausalito and Sacramento owns the complex and is responsible for making the repairs. Sharon Gomez, the apartment building’s on-site manager, says they are not questioning the need for work and want to get it done appropriately. While some residents defend Gomez and Sharma, Hunter’s Point failed to meet an August 30 deadline to shore up the balconies. The company left permits waiting at City Hall and, despite being told to hire a licensed contractor, hired an unlicensed handyman to perform repairs. On September 2, West Sacramento firefighters were called to the building after a mishap on a balcony left the handyman injured. The units and balconies were sealed by September 4th and the company was again ordered to employ a licensed contractor. Hamilton said the company has become more responsive and that officials plan to be in contact with the owners on a daily basis.

The balcony issue is not the first problem at the complex. Inspectors have been on-site since July to monitor work on a building that had been damaged in a blaze that occurred nearly four years ago. Hamilton said there have been “miscellaneous violations here and there” at Hunter’s Point. The latest example involved units that did not have working smoke and carbon monoxide detectors, a violation our team finds particularly disturbing. Inspectors discovered the rotting balconies during a sweep of the buildings.

California Tenants’ Rights Law Firm Protects Renters Statewide
Tenants have rights. If you are a California renter and your landlord is not maintaining the property in a safe and habitable state, please call. While based in Northern California, we work with tenants throughout the state, enforcing state law as well as local ordinances. In most cases, we can resolve landlord/tenant disputes without the need for a trial. Do not assume your case is too small to matter. Visit the California Department of Consumer Affairs for more details on tenant’s rights and landlord’s duties.

In addition to habitability matters, our firm also helps tenants in eviction matters including cases of wrongful eviction, improper landlord move-in, and constructive eviction. Contact our office to schedule a free consultation with our experienced California landlord/tenant lawyer.

See Related Blog Posts:
An Overview of The Implied Warranty of Habitability Under California Law
California Landlord-Tenant Law Protects Renters from Common Contaminants
(Photo by Vagabond Shutterbug (flicker user); photo is not of location in article)