While there are general themes and principles that run throughout injury law, ultimately each case is unique. Few cases illustrate this truth as well as the collision in June where a firefighter is accused of driving a ladder truck while intoxicated, hitting and seriously injuring a motorcycle rider, and then leaving the accident scene. It is a case that raises complicated legal issues and involves complex, disputed facts and seems to only get more complicated with time, making this emergency responder accident a fascinating case for our San Francisco DUI injury attorney to follow. 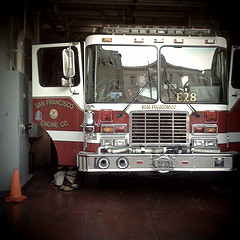 When Alex Bastain, the San Francisco district attorney’s spokesperson, said that “[t]his is not your run-of-the-mill DUI investigation,” he was understating the matter. According to The San Francisco Chronicle, Michael Quinn had been with the San Francisco Fire Department for 23 years prior to the events of June 29. On that night, he took the wheel of a department ladder truck en route to a call that turned out to be a false alarm. As he sped through a red light at the intersection of Fifth and Howard (a surveillance camera reportedly shows Quinn running the red, despite initial statements to the contrary by a higher-up), the truck hit a motorcycle, flinging the rider into a fire hydrant and leaving him seriously injured. Quinn did not wait for police, who arrived 40 minutes later. He was caught on camera drinking water at a pub near the collision, in what police suggest was an attempt to sober up, before he finally returned to the station several hours later. Despite the delay, when police finally caught up with Quinn he had a blood alcohol level of 0.13, in excess of the standard legal driving limit of 0.08 and a violation of the Fire Department’s “zero tolerance” stance for drinking while on duty.

While Quinn was arrested on suspicion of driving under the influence and involvement in a hit-and-run, he has not yet been charged and the District Attorney’s office says that the investigation is not yet complete. This week, the public learned the D.A. is also looking into whether Quinn’s fellow firefighters tried to cover for their colleague. Individuals within the Fire Department have told reporters that at least 21 firefighters, paramedics, and other on-duty personnel have been interviewed by police. Fire Chief Joanne Hayes-White also confirms that her office is considering taking disciplinary action against firefighters who were also on duty the night of the incident. Potential targets include a firefighter who denied being with Quinn at the pub when Quinn was drinking water post-collision, but who sources say can be seen on security camera footage.

Emergency Responder Accidents: Statistics and Liability
Accidents involving emergency responders happen with greater frequency than many would imagine. A Participant Guide intended for use with a safety program offered by the International Association of Fire Fighters cites a study from 1998 that, using data from a three year period, found that in an average year there are 2,472 fire apparatus collisions across the United States. These collisions result in 21 civilian deaths and injure 642 civilians in a typical year.

While the Chronicle report focuses on criminal and disciplinary actions, a case such as this is likely to lead to a civil injury suit as well. A personal injury suit stemming from a fire vehicle collision might involve a number of complex legal issues including employment law principles (i.e. when an employer is responsible for acts of an employee) and sovereign immunity questions (i.e. the ability to sue the government and/or government-related entities and special procedures relevant to such suits). Navigating these issues, and navigating the wide range of issues that can arise in what appears to be the simplest of personal injury claims, requires an experienced Northern California personal injury attorney. Attorney Greg Brod has the wide-ranging experience vital to serving as an effective plaintiff’s lawyer, including an understanding of the many issues that can arise alongside an injury claim such as employment or sovereign immunity questions. Call if he can put this expertise to work for you.