Sometimes the statistics aren’t enough. Sometimes it takes a story, one with very real tears, to make people pay attention to a serious safety threat. While we still believe in sharing statistics, the team at our Oakland accident law firm hopes that sharing the story of four lives cut short helps prevent future tragedies tied to drowsy driving.

Remembering the Victims of a Drowsy Driving Crash 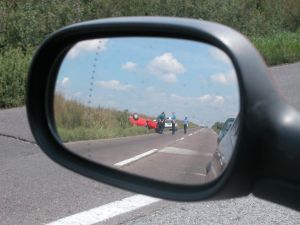 According to The Oakland Tribune, it was the first year that George Moa’s parents allowed him to drive to Las Vegas with his cousins to watch a major rugby tournament. Along with David Moa (19), Malia Moa (17), Rachel Fisi’iahi (19), and Hunter Halatoa (17), George enjoyed a weekend of sports, concerts, and food, before climbing into a rented SUV for the trip home to Oakland on Monday. Rachel started off in the driver’s seat, but she handed the wheel to George because she felt too tired. About 50 miles southwest of Bakersfield, George fell asleep at the wheel. Police report the SUV was travelling at nearly 90mph when it drifted into the roadway’s center divider and flipped over. George, David, Malia, and Rachel all died nearly instantaneously. The only survivor, Hunter, incurred non-life-threatening injuries when he was ejected from the SUV. A family friend reported that several of the travelers were not wearing seatbelts. Police are performing tests to determine if drugs or alcohol played a factor in the accident.

Family members and friends told the paper that the teens were part of a large but close-knit family. Weekly family gatherings regularly draw more than thirty people. All of the teens played rugby and three were part of a family band. George worked at a packing plant and was preparing to return to school. Malia was a star basketball player at Aspire Academy. Rachel was a student in forensics at City College of San Francisco and worked to help her disabled parents. David graduated from Castlemont High, where he played football, and was currently a student at Laney College. Hunter, the sole survivor, is a Castlemont student. George’s father said his son emailed him photos of the cousins having fun during their Las Vegas trip. He and his wife say they still agree with their decision to allow the teens to go on the trip.

Looking at the Numbers: National Sleep Foundation’s Drowsy Driving Website
The story of these very real teens, four lives cut short and one changed forever, gives meaning to the facts and statistics on drowsy driving. The National Highway Traffic Safety Administration estimates that 100,000 police-reported crashes annually are directly linked to operator fatigue, including an estimated 1,550 deaths and 71,000 injuries. However, there is no test for fatigue and state reporting is inconsistent, leading many to believe this is a substantial underestimate. According to the National Sleep Foundation’s (“NSF”) Drowsy Driving website, 60% of adult drivers report having driven while drowsy in the past year and 37% say they actually fell asleep at the wheel in the past year. Data from countries with more consistent reporting procedures suggests that drowsiness is a factor in 10 to 30 percent of crashes. Notably, young drivers are more likely to drive drowsy, with NSF reports suggesting 71% of drivers between 18 and 29 drive while tired compared to 52% for the 30 to 64 age group and 19% of those 65 and older.

One more statistic: The NSF cites an Australian study finding that being awake for 18 hours resulted in driving impairment comparable to a blood alcohol concentration between .05 and .10 (the legal limit in all 50 states is .08).

Some Final Thoughts
Sleep deprivation has become a way of life. Combine that with our driving-centric culture and tragedy is all but certain. Our thoughts go out to the families of the young people who lost their lives in Monday’s crash. We hope their story captures people’s attention and makes people take the threat of drowsy driving seriously. As an Oakland drowsy driving law firm, we see people whose lives are changed forever by accidents. We hope that knowledge leads to prevention and we know that prevention saves lives.

See Related Blog Posts:
The Dangers of Drowsy Driving and the Damage it Causes

(Photo by “infinity” on Stock.xchng)