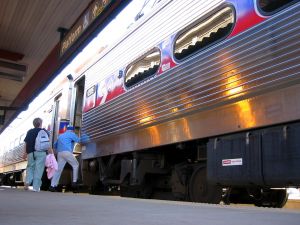 The deadly collision between an Amtrak train and a sport utility vehicle at a railroad crossing in East Oakland on Sunday night that resulted in the death of the driver of the SUV is still under investigation. However, San Francisco train accident attorney Gregory J. Brod would point out that what we do know about the unsettling incident is that it has added yet another figure to the troubling statistical trend for 2014 concerning fatalities and injuries at railroad crossings.

According to the San Jose Mercury News, the fatal collision occurred at about 10:05 p.m. Sunday when an unidentified 48-year-old Oakley man drove his Acura MDX around a barrier onto the tracks at 50th Avenue and San Leandro Street in Oakland and a northbound Amtrak Coast Starlight struck the SUV, killing the motorist. The train, whose point of origin was Los Angeles, was on its way to Seattle carrying 200 passengers and crew and came to a stop at High and San Leandro streets after slamming into the SUV. The Alameda County Coroner’s Office is investigating the incident as an apparent suicide; the motorist was pronounced dead at the scene, while no one aboard the train was injured.

Whether or not officials determine that the deadly incident on Sunday was a suicide this much is clear: when there is a collision between a train and a motor vehicle, damage and the potential for injury or death will fall lopsidedly on the later. Indeed, according to the train safety advocacy group Operation Lifesaver, the force of a 30-car freight train hitting a motor vehicle is equivalent to that of the same motor vehicle striking a aluminum soda can – a decidedly no-contest equation. And a motorist is 20 times more likely to die in a collision involving a train than in a crash involving another motor vehicle.

The most recent statistics from the Federal Railroad Office of Safety Analysis detail a less-than-reassuring picture of railroad crossing accidents involving trains and motor vehicles in the United States, including the following:

While it remains to be seen what findings will come out of the investigation concerning the collision between an Amtrak train and SUV in Oakland on Sunday night, in any collision involving a motor vehicle or a pedestrian and a train liability issues have to be determined, and that requires the assistance of an experienced personal injury attorney. If you or a loved one has been involved in a collision with a train, please contact the attorneys at the Brod Law Firm for a free consultation.
-James Ambroff-Tahan contributed to this article.