Express Waivers: They Can Be Overcome

Express waivers are often Defendants’ Exhibit One in recreational injury cases.  Waivers take many forms, including agreements signed by parents enrolling children in youth sports, releases signed by participants in grueling obstacle course races, and even waivers printed on the back of ski lift tickets.  Many people do not even pursue an injury claim because they assume a waiver precludes all legal claim.  This is a mistake.

While waivers are generally enforceable in California, there are exceptions including:

For an interesting discussion of waivers and extreme obstacle races, see the ABA Journal’s 2014 article on the topic.  Ultimately, the enforceability of a waiver is a very fact-specific question and seriously injured individuals (or their loved ones) should talk with an experienced sports injury lawyer about whether an express waiver can be overcome.

Assumption of the Risk: The Limits of Implied Consent

After waivers, the doctrine defendants are most likely to cite in sports injury cases (extreme or everyday) is assumption of the risk.  This concept is similar to waivers but waivers are express agreements whereas assumption involves implied consent.  Essentially, per the assumption doctrine, when someone knew and understood the potential/inherent risks but chose to participate anyway, the defendant is not liable for failing to use ordinary care to prevent injuries associated with those inherent risks.

This doctrine is built into Civil Jury I 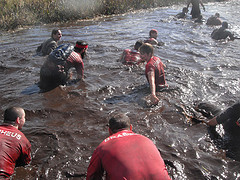 nstruction 408  which lists the following as one requirement for claims against a coach, teacher, or other instructor: “[The defendant] intended to cause [the plaintiff’s] injury or acted recklessly in that [defendant’s] conduct was entirely outside the range of ordinary activity involved in teaching or coaching [the activity].”  The assumption doctrine exists to prevent discouraging active participation in recreational activities and applies to other reasonably anticipated defendants.

Like express waivers, the assumption doctrine does not apply in cases of gross negligence or when the defendant unreasonably increased the danger.  It is a very case specific inquiry that looks at the nature of the activity and the role of the defendant. In the world of obstacle races, the defense might fail because courses often include hidden dangers.  The ABA Journal quotes David Horton, a California law professor:

“The whole point of an obstacle course race is to in fact come up with all these inherent dangers and risks. That makes it very difficult to fit within our existing paradigms. We tend to think of risks as being an unfortunate byproduct of things like traditional sports, but for something like [an obstacle course] the risk is the purpose of the event.”

Sometimes, a secondary assumption analysis is used to apportion damages.  This analysis is similar to the doctrine of comparative negligence.  For example, a court may award 60% of the total damages where the plaintiff is deemed 40% responsible for her own injuries.

The Lesson: Talk to a California Sports Injury Lawyer Before Assuming Your Claim is Barred

In sum, the most common defenses to sports injury claims are the closely related concepts of express waiver and implied assumption of the risk.  While these doctrines bar some claims, they can be overcome in appropriate cases.  For anyone who has been seriously injured during a recreational activity, it is worth having the right attorney look at your case.  Attorney Greg Brod is an experienced Oakland sports injury attorney in Oakland with additional offices in San Francisco and Santa Rosa.  Since most cases are handled on a contingency fee basis, you only pay us if you recover money.  An initial consultation is always free.  Don’t let the people responsible for your injury (or their lawyers) intimidate you.  Waivers can be overcome as can other defenses.  Call now: (800) 427-7020.