When people think of the dream of home ownership, they often form a picture in their minds that includes a lovely home set on a well-manicured and very green lawn. In order to make this dream a reality, at least insofar as it involves a lush lawn, many rely on pesticides and other chemicals. Professional lawn care companies use such substances to produce green lawns for both residential and corporate clients (ex. office parks with built-in green spaces). Unfortunately, these chemicals are not without their downsides. Our Bay Area toxic chemicals attorney is concerned about these downsides, particularly when the impact the health of our community members.

Research Shows Pesticide Runoff Poisons Area Creeks, Threatens Creek-Dwelling Creatures
A recent report in the Contra Costa Times raises concerns about the impact of pesticide runoff on the county’s waterways. Notably, environmental scientist Dr. Donald Weston has led interest groups expressing concern about a species of tiny crustaceans, Hyalella Azteca, and a red worm-like species called Chironomus dilutus. He worries that pesticides applied to lawns are leaking into area creeks and killing the aforementioned species. Weston notes that the Hyalella Azteca crustanceans are particularly sensitive to insecticides used in professional-level lawn care products and household items like Raid. Additionally, the Chironomus creatures are being killed due to exposure to a flea-killing pet treatments that are also used for ant and termite control. Both the presence of lethal chemicals and the growing resistance of aquatic life to even high levels of chemicals. 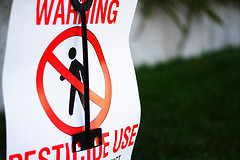 Tests on creeks in the region found pesticide levels ranging “from nearly non-existent to mortally toxic.” More specific urban runoff data collected between 2006 and 2010 showed toxicity in all Sacramento and Bay Area communities, with danger peaking after a rainfall. The researchers suggest the toxins are linked to lawn care products and urge the use of pesticide-free treatments.

The Human Side: Pesticides and Health Risks
Weston’s research did not look at the impact of the toxins found in local creeks on humans. However, the Environmental Protection Agency (“EPA”) notes that laboratory research has linked pesticides to a wide range of possible health problems including nervous system damage, cancer, skin irritation, hormonal issues, birth defects, and other problems. Children face an elevated risk, especially to exposure through food, given their size in proportion to the likely level of exposure and the fact that their bodies are still developing.

As the EPA notes, the risk of pesticide-related health problems involves both the toxicity of a given pesticide (i.e. how dangerous it is) and the likelihood/level of exposure. The agency does regulate pesticides, but health concerns remain. The Pesticide Action Network notes that exposure can build up in our bodies from the time we are in the womb through our senior years and suggests evidence continues to build showing the dangers of such prolonged chemical exposure.

Despite both federal and state regulations, pesticide exposure remains a very real threat to the health and safety of both children and adults. If direct or indirect exposure to a pesticide harmed you or someone you love, call our Oakland chemical exposure attorney. Our firm can help whether the exposure was a one-time event or something that built up over many years.