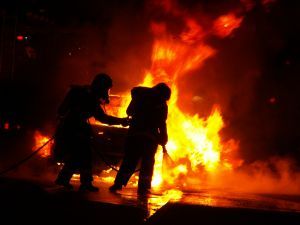 If autumn is typically considered the height of the fire season in California, this fall has been a veritable tinderbox of pyro-related problems for Tesla Motors, especially after the electric-car maker experienced a fire at its plant in Fremont on Wednesday. The incident is an example of where Bay Area personal injury attorney Gregory J. Brod stands ready to represent anyone who has suffered a burn injury or harmed in an industrial accident or defective products case.

According to the San Francisco Chronicle, on Wednesday three employees at Tesla’s plant in Fremont suffered moderate to serious burns or other possible injuries – one worker’s condition is still being evaluated – while they were working with pressurized equipment after an aluminum casting press failed, causing hot metal from the press to injure the employees.

Model S Troubles on Highways
The Wednesday blaze is the latest in a series of fire-related woes to befall the Palo Alto-based Tesla Motors. On Nov. 9, the driver of a Model S struck a tow hitch on Interstate 24 near Murfreesboro, Tenn., which damaged the automobile’s undercarriage and sparked a fire. That incident prompted a call from Clarence Ditlow, the executive director of the Center for Auto Safety, for the National Highway Traffic Safety Administration to launch an investigation. The NHTSA had declined to investigate an earlier fire involving a Tesla sedan that occurred Oct. 1 in Washington state.
In the Washington state incident last month, a Model S burst into flames while it was traveling on Route 167 near Seattle when, according to the driver, the vehicle hit some debris on the road. The automotive blaze prompted concern over Tesla’s battery technology and sent the company’s stock plunging after a YouTube video quickly surfaced that recorded the incident.

Between the incidents in Washington state and Tennessee, another accident involving a Tesla Model S occurred in Mexico. With three crashes in six weeks, it stands to reason that there would be sentiment for investigations and even a recall, but Tesla Motors CEO Elon Musk stated on Monday that media coverage of fires involving cars manufactured by his company were overblown and that Tesla will not implement a product recall for the Model S.

The Severe Consequences of Burns to the Skin
While automobile company executives may feel that media coverage of fires that start in their products may be overblown, it’s hard to exaggerate the injuries that result from serious burns, suffered either in an industrial setting or while one is a motorist or passenger of a vehicle that catches fire. The skin acts as the body’s first line of defense against bacteria and viruses, and it is a complex structure that helps to regulate its temperature as well as the amount of fluid it contains. Within the skin one also finds a complex network of blood vessels and nerves. So when the body suffers a burn – anywhere from a first-degree burn to, most seriously, a third-degree burn – essentially a breach has occurred in the body’s defenses, opening the way for serious complications as well as scars, both physical and emotional.

Gregory J. Brod and the other attorneys at the Brod Law Firm are experienced at representing those who have suffered a burn injury and take such traumatic experiences very seriously. If you or a loved one has been harmed in this way, please contact us for a free consultation.
-James Ambroff-Tahan contributed to this article.