Whether you find it beautiful, terrifying, or both, lightning is a “striking” example of nature’s power. Lightning can cause enormous property damages and it can also cause serious injury or even death. While you can’t sue Mother Nature for lightning injuries, there are sometimes individuals or entities that contributed to the danger. Our San Francisco lightning injury law firm can help victims pursue money damages and hold such entities responsible for their role in lightning tragedies. 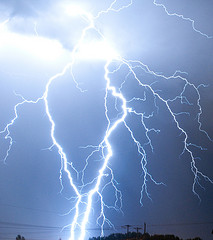 As CNN reported, people enjoying Southern California’s Venice Beach last Sunday saw their day quickly shift from relaxing and fun to frightening and deadly. A round of thunderstorms had been forecast and a lightning strike hit the water and beach at 2:51 PM. The bolt left 13 people injured; all had been in or near the water and 8 required hospital treatment. One additional person, a 20 year old man, was killed, although officials were not initially certain whether he died because of the lightning itself, drowned, or was trampled.

Lightning, Negligence, & Legal Liability
At first it might seem that a lightning strike victim would be without a legal recourse. Sometimes that holds true, but sometime there are potential avenues for civil liability. For example, a person or group may have failed to fulfill a legal duty to protect the injured person. In other cases, the potential defendant may have contributed to the possibility of a lightning injury. Examples of lightning strike cases that gave rise to civil claims include:

We did not find news reports on the resolution of several of the above claims, perhaps because they ended in settlement including confidentiality clauses. Still, they are just a few examples of lightning-related injury and wrongful death litigation and the fact that they made it beyond initial pleadings shows there is legal merit in the concept.

As the CNN report on the Venice Beach tragedy notes, lightning fatalities are relatively rare in California (note: Florida sees the highest number of lightning deaths, consistent with two of the four examples above coming from Florida). Still, lightning injuries and lightning deaths remain a danger everywhere. If lightning or another weather-related tragedy injured you or a loved one and you believe a negligent individual or group contributed to the event, you may have a civil claim. Call to arrange a consultation with our Northern California civil negligence attorney in Santa Rosa, San Jose, Oakland, or San Francisco.