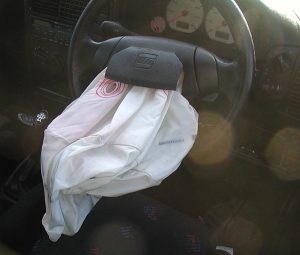 Those who have paid careful attention to the news over the past year may remember manufacturer Takata, whose defective airbag inflators are believed to be responsible for at least 16 deaths and another 100 injuries. According to reports, the defective airbag inflators contain a substance called ammonium nitrate. Ammonium nitrate is used to inflate the airbag quickly in the event of a crash, but the compound can explode unintentionally in hot and/or humid conditions. In the Takata airbags, the explosion causes the metal canister in which the compound was stored to blow apart and become deadly shrapnel. The Takata inflators were mainly found in cars manufactured by Honda.

Recall Notices Not Having Intended Effects

Nearly 70 million Takata inflators have been recalled, and another 313,000 Hondas and Acuras were recalled over the summer after regulators found that the airbag inflator canisters contained in these specific cars had at least a 50% chance of rupturing unexpectedly. Owners of the cars were urged to have the vehicles repaired immediately and not to drive them until the necessary repairs had been made. Yet as of late October, 2016, only about 13,000 cars have been repaired. So, who is to blame?

Honda Can Only Make Reasonable Efforts to Contact Car Owners

It is tempting to see the small number of repairs that have been made to the most recent 313,000 cars recalled and demand that the auto manufacturers who used the Takata assembly in their vehicles make more efforts to contact the owners of these recalled vehicles. However, there is only so much Honda or any other car manufacturer in this situation can do:

Individuals who receive recall notices should act upon them with urgency because (as is the case in this Takata recall) repairing the vehicle’s defect may be a matter of life and death. Individuals may be surprised to find that a car manufacturer may not be completely responsible for losses and expenses if they or their loved ones are injured by a defective car but they received notice of the defect and instructions for having the vehicle repaired, but chose not to do so. A car manufacturer in Honda’s position must make reasonable efforts to contact owners of defective vehicles and encourage them to have their vehicle repaired, but some responsibility for bringing a vehicle in for repairs will fall on the owners themselves.