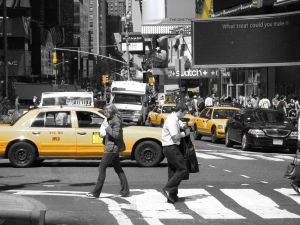 Most drivers instinctively improve their driving habits when passing police stations. Not so with one taxi driver, who cut off a bus while trying to make a right turn on Thursday, January 26. The Yellow Cab driver pulled the aggressive maneuver right outside the Bryant Street Police Department and the Hall of Justice, which houses the Traffic Division of the San Francisco Superior Court.

The SF Appeal reports that the taxi caused the bus to collide with it rear right bumper, sending it spinning into a fire hydrant. Luckily, none of the bus’s passengers was harmed and the fire hydrant remains intact. However, the taxi’s passenger was taken to the hospital with minor injuries.

Taxi drivers are culturally regarded as aggressive drivers. Thursday’s accident may not help improve that image. Studies by both University of California, Los Angeles (UCLA) and University of Sydney, Australia posit that a combination of factors may make individual taxi drivers more likely to drive aggressively. Two factors that affect taxicab driver safety are the relatively low income and low regard that drivers receive in exchange for their work. Drivers feel pressure to increase the number of fares they have in a day, thereby raising their income, but also increasing the threat of accidents. Taxi drivers in the UCLA study cited avoiding the loss of income brought on by an accident as the biggest negative incentive to aggressive driving, rather than the importance of customer satisfaction.

In addition to income pressures, taxi drivers also deal with long hours in consistently stressful situations. A taxi driver’s job is essentially to commit to an endless commute. A driver may stay behind the wheel for longer hours than expected in order to make extra fares. Long hours and missed breaks contribute to driver fatigue and increase the chance of an accident.

A University of California, Berkeley study set out recommendations to tweak the taxi medallion system used in San Francisco since 1978. The medallions limit the number of permitted taxi drivers in the city, increasing income as a whole for taxi drivers, therefore alleviating the pressure to engage in risky behaviors in order to increase the number of fares. San Francisco Municipal Transit Agency is also looking into possible schemes for increased access to health care for taxi drivers. After everything is said and done, the Berkeley study lukewarmly asserts that a San Francisco taxi ride is reasonably safe. Of course, individual driver personality is a substantial factor in driver behavior. Therefore, it is impossible to generalize about the safety of taking any particular cab.

Regardless, some consumers find themselves white-knuckled more often than they would like. Victims of accidents like Thursday’s taxi-bus collision may see some of the above mentioned factors involved. If you have suffered injury as a result of reckless driving by a taxi or other professional driver you may want to consult an attorney.