People talk about a “California Lifestyle.” Having met such diverse people in our practice, we’d be hard-pressed to define just one. Any definition would certainly include a mix of sand and surf, land and water, and an active engagement with our environment. Typically healthy, this lifestyle means environmental problems can quickly become health problems. In this post, our Oakland toxic exposure law firm looks at one example — the health impact of sewage spills and sewage contamination. 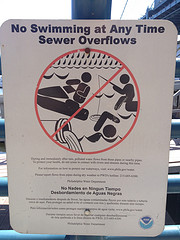 One way sewage can get into our waterways is following a water main break. While sewage isn’t mentioned, The Oakland Tribune recently reported on three water main breaks that occurred around Oakland on Monday. An East Bay Municipal Water District spokesperson linked the breaks with work on an aqueduct and related pressure changes. The largest break flooded Kingston Road near the Piedmont Border. There was also a break at 47th Avenue and a third at Walavista & Arimo Avenues. An official noted that all of the affected pipes were aging.

A 2009 article from an environmental science group said 20 million gallons of raw sewage had been release into California waterways in 2008, a record-breaking number they expected would be exceeded that year. Old worn-out pipes, severe weather, and a lack of funding could, per the article, “add up to a disaster of septic proportions.” Perhaps in recognition of that danger, the EPA and others filed a lawsuit seeking to prevent sewage spills. That suit was recently settled, as reported in The The Contra Costa Times, with an agreement that seeks to improve 1,500 miles of aging pipes that threaten to release sewage into San Francisco Bay following heavy rainfall. Cities and water districts agreed to pay for prior violations and the settlement continues the requirement that homeowners inspect/upgrade certain sewer lines upon selling the home or undertaking substantial renovations.

The Health Risks
There are good reasons for paying attention to sewage spills and similar toxic leaks. American Rivers, a water and waterways conservation group, hosts a general sewage spills webpage and PDF on related health risks. More than 850 billion gallons of untreated/raw sewage are released into our waterways each year. Sewage releases carry disease-causing pathogens into drinking water supplies and swimming areas with approximately 7.1 million mild-to-moderate and 560,000 moderate-to-severe cases of waterborne illness occurring annually in the U.S. The EPA believes 1.8 to 3.5 million people are sickened by recreational contact with sewage-contaminated waters each year. Authorities are also increasingly worried about pharmaceuticals finding their way into waterways via sewer overflows, a hazard that may cause serious hormonal health hazards.

We are comparatively lucky compared to many nations; most waterborne illnesses in the U.S. are intense but relatively brief thanks to medical care. However, there are still many cases in which sewage overflows lead to long-term or even fatal illnesses, with the elderly, infants, and the immunocompromised at greatest risk. In 1993, for example, a parasite contaminated Milwaukee’s drinking water, causing 403,000 illness and 70-100 fatalities (the majority of deaths involved HIV-positive individuals).

Legal Rights of Californians Sickened By Sewage Spills
Even with the recent settlement, sewage spills are unlikely to disappear. While some are truly unfortunate accidents linked to severe weather, numerous sewage spills can be traced to the actions of an entity or individual. The risk of illness is exponentially increased if an entity fails to report a leak or spill to the appropriate health authorities. These actions may be negligent (ex. if a failure to inspect parts of an aging system leads to a leak) or distressingly intentional (ex. if a company opts not to report a sewage release for fear of negative press or economic consequences and people are sickened because they are unaware that water is tainted).

The law protects the wrongfully injured. A toxic tort or other civil claim may allow a victim of sewage-exposure to recover economic damages. If you were sickened or lost a loved one because you were exposed to a sewage spill or other toxic release, call our Northern California toxic tort attorney in Oakland, San Francisco, or Santa Rosa. We can help.