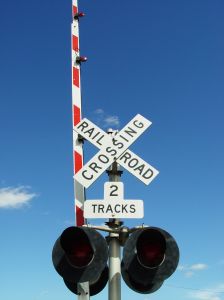 An Amtrak train smashed into a big rig that was partially stopped on the tracks on Thursday, March 8 according to the ABC Local News. The big rig was stopped at a traffic signal but did not realize that he back end of his truck was still on the tracks. The railroad arms came down on the back of the truck and the oncoming train repeatedly honked an alarm. The big rig did not move in time and the train was unable to avoid crashing into it.

The train engineer was sent to the hospital with a back injury and five passengers were treated for minor injuries. The driver of the big rig was cited.

Truck drivers go through training to learn how to handle loaded eighteen wheelers and obtain their Commercial Driver’s License. Trucking companies are concerned with driver safety, especially because they may be liable for damage or injury caused by employee drivers. The Federal Department of Transportation has put limits on the hours a truck operator can drive and the California Department of Motor Vehicles requires that a Commercial Driver’s License applicant pass a medical examination. Despite high standards for drivers, the number of trucking accidents has risen 20% over the last twenty years. The number one reason for these accidents is driver error, as was the case in Thursday’s collision.

Even when drivers do not follow protocol set out by their employers, the employer is still liable for the employee’s actions while driving a company vehicle. This legal theory is called respondeat superior and presumes that an employer holds authority over its employees and is therefore responsible for their actions.

In the past, shipping companies tried to avoid liability by putting distance between itself and its employees and even the big rigs themselves. Companies would lease trucks instead of buying them and claim that they were not liable because they did not actually own the truck involved in an accident. In other cases, companies limited driving positions to independent contract work, and claimed that the drivers were not employees in the strict sense of the word. In the 2011 court case, Sperl v. Robinson, an Illinois Appeals Court struck down that argument. Additionally, the federal government passed regulations to end those defenses.

Due to the complicated nature of dealing with a large trucking company, if you are involved in an accident with a big rig, it is advisable to consult with an attorney about recovering for medical expenses, pain and suffering, and other costs.

Brod Law Firm is dedicated to pursuing each client’s case zealously, paying close attention to the unique nature of each client’s situation. If you have been injured in an accident, please call our experienced personal injury attorney today for a free consultation.