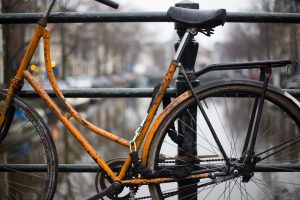 Cyclist injuries and fatalities have become an issue throughout California as more people turn to bikes for exercise and as their main mode of transportation instead of vehicles. According to the California Office of Traffic Safety, there were 128 bicycle fatalities in 2014. This was a 12.9% reduction from the 147 deaths in 2013. However, it is more than the 116 deaths of 2011 and 124 of 2012.

Motorists often have a difficult time sharing the road with bikes. Many drivers fail to notice bikes or leave them enough room. There are also infamous incidents of cyclists being “doored” by drivers and passengers who open their doors into oncoming cyclists. Overall, the most common causes of vehicle-bicycle collisions include:

What to do After a Bicycle Accident

If you are hurt in a bicycle accident caused by a vehicle, contact a San Francisco personal injury attorney as soon as possible. A lawyer can thoroughly investigate the crash to determine liability and gather evidence of the at-fault driver’s negligence. By proving the driver was careless, reckless, or intentionally acted wrongly, you can gain compensation for your:

If a Loved One Was Killed in a Bike Accident

Unfortunately, many vehicle-bicycle accidents lead to fatalities. Cyclists, no matter the precautions they take, cannot be as protected as someone in a metal and plastic cage. What would have been a minor fender bender with another vehicle can be a fatal accident with a cyclist.

If you lost a loved one through a bike accident, you may be able to file a wrongful death claim against the at-fault driver. California’s Code of Civil Procedure section 377.60 controls how wrongful death actions work. Under the law, if you are a surviving spouse, domestic partner, child of the decedent, grandchild of a deceased child, a dependent, or the next person who would be entitled to inherit from the decedent through California’s intestate laws, then you can file this type of claim.

This claim arises when the decedent’s death was caused by a wrongful act, like the commission of a crime, or another person’s negligence. If the decedent would have had a personal injury claim had he or she lived, then you likely have a valid wrongful death claim. Through this lawsuit, you can seek compensation for medical expenses, funeral expenses, and any other damages the decedent would have been entitled to. However, the damages cannot include pain and suffering or disfigurement.

If you were injured in a vehicle-bicycle accident or you a family member in a collision, contact the experienced bike accident lawyers of Brod Law Firm at (800) 427-7020.