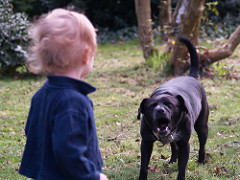 Like most of you, we love dogs.  Whether pet owners themselves or just people who enjoy the sight of a happy puppy on the street, our team knows there is no love as pure as that offered by a dog.  We also know that sometimes dogs attack and that the victims of those attacks deserve justice, especially when that victim is a young child.  There are special rules for child dog bite victims in California and our San Francisco dog bite lawyer helps ensure they receive all the compensation they deserve.

Last week, ABC7 News reported that a young girl was bitten in the face by a dog in a Pinole home.  The 3-year-old child was reportedly alone in a room with her uncle’s American bulldog at the time.  Contra Costa Animal Services told reporters that the child was taken Children’s Hospital in Oakland where she was treated for two one-inch facial lacerations.   Per routine practice, the animal was taken in by animal services for a 10-day quarantine period when he will be tested for rabies and his behavior will be assessed.  The owner will then be allowed to petition for the animal’s return or opt to surrender the dog.

Steve Burdo of Contra Costa Animal Services spoke to ABC7 about the event.  He explained, “What we like to tell people is provocation or not, when it comes to young children, animals should be trained to be around children. And these incidents should be avoidable.”

As a general matter, California law treats dog bites as a strict liability offense.  This means that the victim does not need to prove negligence in order to hold the owner responsible for the dog’s bite.  Under a strict liability framework, it does not matter whether the owner had prior knowledge that the dog might attack and there is no “first bite free.”

Nonetheless, courts do allow dog owners to raise a few defenses to dog bite claims.  Although it appears contrary to the statute, courts have repeatedly allowed dog owners to avoid liability in case such defense is the assertion that the victim “assumed the risk” that the dog might attack (“The defenses of assumption of the risk and contributory negligence may still be asserted.”  Johnson v. McMahan, 68 Cal.App. 4th 173 (1998)).  As such, defendants can sometimes avoid liability if they can prove the plaintiff provoked the dog and thus assumed the risk the dog might bite.

While provocation can be a defense to a dog bite claim involving an adult, it does not apply to cases involving young children.  The provocation defense and the notion of assumption of risk are both tied to the doctrine of comparative negligence, a doctrine that looks at the plaintiff’s own negligence and that negligence’s role in the events.  California law deems children under age 5 too young to knowingly act with negligence.  Therefore, the defense of provocation is not available in dog bite cases where the victim is a young child (“Given the legal incapacity of minors under the age of five to act with reasonable care, the sole factual issue in this case concerning the victim was his age: was he under the age of five and, therefore, excused due to incapacity from taking reasonable precautions against the attack that killed him.” People v. Berry, 1 CA 4th 778 (1991)).

A Law Firm for Dog Bite Victims in Northern California

We love dogs, but we also know that dog bites can cause serious injuries or even death.  The Brod Law Firm works with dog bite victims of all ages throughout Northern California.  Please call if we can help you.  There are offices of our dog bite law firm in Oakland, San Francisco, and Santa Rosa to allow us to serve the entire Northern California region.