It is an unfortunate reality that there are some topics we expect to discuss repeatedly on this blog. While we wish drunk driving accidents, motorcycle crashes, and dog bites were one-time affairs, that a lesson was learned and a fact-pattern never reoccurred, but we know that isn’t the case. We will continue to write about these incidents in the hopes of preventing them, in order to educate those harmed about their legal rights, and to let the injured know we are here to help. There are also topics we sincerely believe won’t make headlines more than once. While the general topic of product-related injuries is one we know will recur, our San Francisco product liability law office never expected that more than two years later we’d be revisiting the risk of children ingesting detergent pods.

17,000+ Young Children Poisoned by Detergent Pods
Earlier this week, CNN reported on the continuing problem of children ingesting single-use detergent packets. Young children appear to mistake the colorful pods for candy. Researchers with the journal Pediatrics found that 17,230 children under age six were accidentally poisoned by the pods between March 2012 and April 2013. Those numbers that work out to almost one child poisoned per hour and 7.5% of the children suffered a “moderate or major medical outcome” with 4.4% requiring hospitalization. Ingesting the detergent pods can cause immediate respiratory distress and violent vomiting and exposure to the eye can cause severe irritation and a temporary vision loss. 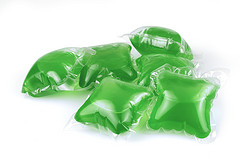 Concluding the packets pose a “real risk” to children, the researchers who assembled the foregoing statistics called for a new national standard addressing the packaging and labeling of the detergent products. They are not the first to call for change. In 2012, Senator Chuck Schumer of New York asked the Consumer Product Safety Commission (“CPSC”) to require detergent manufacturers use child proof packaging when selling detergent pods and to improve product labeling to warn about the danger of children mistaking the pods for food. The following year, the CPSC warned parents about the danger and asked manufacturers to improve packaging. However, the agency did not require any change.

Product Liability Law – Compensating Victims, Hitting Manufacturers in the Wallet
Despite an overall decline in the number of child poisonings stemming from ingesting household products, the number poisonings tied to the detergent pods has grown significantly.
While prevention is preferable, there may be legal recourse when a child is poisoned by a detergent pod. Product liability law exists to provide compensation when consumer products harm the public. These cases typically revolve around one of three basic theories: 1) Design defect (the design is inherently dangerous, even though safer alternative designs exist); 2) Manufacturing defect (the design is typically safe, but the specific item didn’t adhere to that design and that defect made it dangerous); or 3) Failure to warn (the manufacturer/seller failed to provide adequate warnings about a known danger).

In recognition of the duty companies owe when releasing a product into the marketplace and the difficulty a plaintiff would have proving traditional negligence, California uses a strict liability rule in product liability cases. The plaintiff does not need to prove that the defendant had a dangerous intent. Further, a plaintiff can prevail even if the conduct fell within industry norms (i.e. other companies would the company acted reasonably, meaning a traditional negligence claim would not be successful).

A Plea for Change, A Commitment to Victims
We sincerely hope this is the last time we discuss children being poisoned by detergent pods. This problem has gone on for too long and something needs to change in order to keep our children safe. While parents should certainly keep all detergent products out of the reach of young children, manufacturers should also work make the product less enticing and take other steps to prevent children from ingesting the packets. In addition to compensating victims, product liability claims that hit manufacturers in the wallet may provide an added incentive for companies to change.

We are committed to helping members of our Northern California community who are injured because companies placed unnecessarily dangerous products on store shelves. If you or your child is injured because of a dangerous or defective product, call our product liability law firm in San Francisco or at one of other convenient Northern California locations to discuss how we can help.