In a Traffic Safety Fact Sheet published this past summer, the National Highway Traff 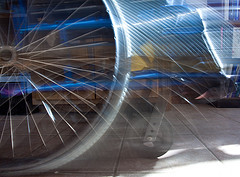 ic Safety Administration says 28 people were struck by vehicles while seated in wheelchairs in 2013.  This number is consistent with the average number of non-occupant wheelchair users killed in motor vehicle accidents from 2007 to 2013.  Although a small percentage of the total number of people killed in car accidents, this number may be under-inclusive (a quick Google search brings up numerous news stories involving wheelchair users hit by cars), does not account for non-fatal injuries, and does not tell us how much more dangerous the roads are for wheelchair users than for other pedestrians.  Another frightening statistic in the report, California saw 7 of the 28 reported fatalities of wheelchair users in 2013.

ITARDA identifies three features of traffic accidents involving individuals using electric wheelchairs: 1) Wheelchairs place an average-sized rider at a lower height than a bicycle rider, making it difficult for drivers to see wheelchairs; 2)  Electric wheelchairs cannot speed up quickly, making it difficult or impossible for a user for observes a potential threat to get out of the way; 2) Although wheelchairs in Japan are treated as pedestrians (as they are in California), users may leave the sidewalk and travel on the road if the sidewalk is too narrow or contains obstacles.  This third concern is also addressed by a report from disability advocate resource Ragged Edge Online that focuses on the danger wheelchair users face when they are forced to travel in the street because the sidewalks lack the necessary curb cuts to allow them to access the pedestrian route.  The author states: “Wheelchair users nationwide risk their lives daily by being forced into the street because their communities, despite the Americans with Disabilities Act, have not bothered to install curb cuts or maintain sidewalks.”

A Brief Discussion of Damages

A quick note about damages – California, like most states, recognizes the “eggshell plaintiff” rule.  In essence, this rule means a defendant takes the victim as he finds him.  This means that someone who caused an accident is responsible for the victim’s injuries even if the plaintiff’s health conditions meant he or she suffered a more serious injury than a typical person would incur under similar circumstances.  This rule, summarized in California Civil Jury Instruction 3928, can be very important for people who use a wheelchair because of conditions that make them susceptible to injury.

A Lawyer for Injured Wheelchairs Users

Every accident is unique and focusing on the details is essential to understanding what happened and who is responsible.  Whether the problem is an inattentive driver or a community’s dangerous roads, our Northern California wheelchair accident law firm helps wheelchair users and their families following traffic accidents.  We can also help wheelchair accidents are caused by product defects such as a faulty power system in an electric wheelchair, a defective lift, or inadequate systems to secure a wheelchair in a moving vehicle.  Call for a personal consultation.