Medical facilities are growing.  Hospitals stretch across multiple blocks and often seem like a small city.  Visitors often need to stop at an information desk or consult a map to find their destination 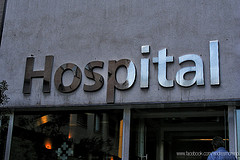 .  In addition to medical personnel, large medical centers may employ dozens of workers in non-medical roles.  Injuries can and do occur on hospital grounds, including many that don’t stem directly from medical care.  In this post, our San Francisco injury attorney looks at a recent appellate ruling that clarifies the law on hospital slip-and-fall accidents and other instances in which standard negligence (as opposed to medical negligence) leads to an injury on hospital grounds.

The Facts and the Lower Court’s Dismissal

In June 2010, heart health concerns led to Asma Pouzbaris being admitted to West Anaheim Medical Center.  When she left her bed to use the bathroom, Pouzbaris slipped and fell.  According to the Complaint filed in the Superior Court of Orange County, the floor had recently been mopped but no warnings had been posted.  Responding to the defendant’s request for summary judgment, the court ruled the claim was barred by the statute of limitations.  Recently, the appeals court reviewed the trial court’s decision and, in a ruling available via the California Judicial Branch’s website, reversed and found the suit was filed in a timely manner.

Ultimately, the case turned on whether the one-year statute of limitations applicable to professional negligence applied or whether the two-year period applicable to ordinary negligence governed.  The lower court agreed with the Medical Center that the lawsuit involved a claim of professional negligence because the alleged wrong was “committed in the act of rendering services for which the hospital is licensed.”  This was read quite broadly to include a duty to exercise reasonable care to protect a patient who is being treated by the facility.  Since Pouzbaris was hurt during her stay at the hospital for medical services, the trial court applied the shorter professional negligence time limit.

Reversing the lower court’s ruling, the appeals court found that the test applied by the trial court was incorrect.  The decision relied on the definition of professional negligence in Section 340.5(2) of the Code of Civil Procedure which focuses on an act or omission “in the rendering of professional services.”  The appeals court found that professional negligence is not about the level of skill required, but rather whether or not the act/omission occurred while such services were being rendered.  For example, consistent with prior rulings, the court said an x-ray technician failing to set a brake on a wheeled x-ray table fell within the realm of professional negligence.  However, mopping the floor and failing to put up a warning would, if proven, amount to only ordinary negligence.

The Impact: “Ordinary Negligence” Treated the Same in Medical and Non-Medical Settings

This ruling is important for a number of reasons.  Pouzbaris’s case was reinstated because the law provides a two year period for claims of ordinary negligence.  Future slip-and-fall cases in medical centers and other general premises injuries on medical property will, barring a change, likely have the same two year limitations period.  While this gives injured individuals more time to file, we always recommend contacting counsel as soon as possible after an injury to ensure your rights are fully protected and evidence is not lost.

Notably, professional negligence claims are subject to several other procedural and substantive rules.  If a claim is classified as ordinary negligence instead of professional negligence, these extra steps do not apply.  As such, the ruling makes it easier for plaintiffs to file and pursue claims involving ordinary negligence in a medical setting.  The decision helps ensure that slip-and-fall cases and other similar injuries are treated the same whether the injuries occur at the hospital or a local mall.

Staying Alert to Changes in the Law

The hospital may decide to appeal and then the California Supreme Court could choose to hear the case or let the current ruling stand.  Another case on a related issue is currently on the high court’s docket.  As always, our Northern California injury lawyer will stay up-to-date on all rulings that could impact injured victims.  If you have questions about a slip-and-fall injury that occurred at a hospital or another injury resulting from “ordinary negligence” on medical facility grounds in Northern California, please call our office.  Our phones answer 24/7 and we offer a free consultation to all prospective clients.