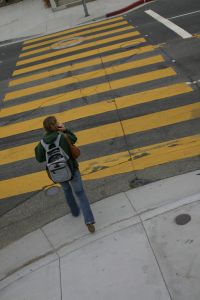 Collisions between motor vehicles and pedestrians are often unnerving enough on their own, but when the pedestrian is injured by a hit-and-run motorist, the incident suddenly becomes much more disturbing – and criminal – in nature. San Francisco pedestrian accident attorney Gregory J. Brod would point out that, unfortunately for the victim, a hit-and-run motorist is literally driving off with some key evidence. In a world that is increasingly filmed, though, sometimes the motorist’s actions are caught on camera.

That, apparently, is what happened in Hercules early on the morning of Jan. 17, when, according to KTVU News, a surveillance video from a passing bus caught a sport utility vehicle strike a man who was trying to complete his passage in a crosswalk. But what the SUV’s motorist did after his vehicle collided with the 70-year-old victim was truly shocking.

“He then stopped his vehicle, got out, and walked over to the victim,” said Hercules Police Department spokeswoman Connie van Putten. “And then when somebody asked him if the victim was OK, he said ‘well, he’s breathing,’ then got back in his car, backed up, drove around the victim and left.”

The police recently released the surveillance video from the bus, whose driver witnessed the hit-and-run incident and helped to alert the police. According to the police, the motorist remained at the site of the collision less than one minute before ditching the scene, leaving a stunned witness to call for help.

The victim, who was crossing the street to catch the bus, hit his head after being struck by the SUV, which lunged forward from a complete stop to hit him. The victim was hospitalized for a few days but is now recovering at home.

In taking off from the scene, the motorist was dashing away with some valuable evidence, namely, his vehicle, which could very well have emerged from the collision with telling front-end damage. But fortunately in this case, the motorist did leave behind a valuable piece of evidence in the form of the film image of him striking the pedestrian. And that video left little doubt for the police to conclude that this hit-and-run accident was an easy call to make.

“They (motorists) have a bump and think maybe they hit a rock or an animal or something,” said van Patten. “They don’t realize they had an accident, but in this case, it was very clear he did hit a person.”

The availability of a video of the incident will help to identify and track the suspect in the hit-and-run collision, who, if caught, faces felony charges. It also serves as a reminder that anyone who has been injured in a collision with a motor vehicle should, if at all possible, take as many photographs and/or video of the scene of the incident, or, even better, of the incident itself.

It is also important for anyone who has been injured in a collision with a motor vehicle to seek the help of an experienced personal injury attorney as soon as possible. If you or a loved one has been injured after being struck by a motor vehicle, please contact the attorneys at the Brod Law Firm for a free consultation.
-James Ambroff-Tahan contributed to this article.

With Numbers in, 2013 Goes Down as Deadly Year for Pedestrians in San Francisco