Perhaps there is no profession that is the subject of as many jokes about greed and misguided ethics as the legal field.  The truth is, however, that most lawyers adhere to a very stringent code of ethics.  For Attorney Greg Brod, these principles are not just rules on paper, but represent a deeply personal commitment to ethical practice.  He is proud to serve as a plaintiffs’ lawyer and, because he values his professional obligations, he also serves as a Northern California legal malpractice lawyer.  At the Brod Law Firm, we take cases of legal malpractice in California personally.

In broad terms, legal malpractice claims in California, require showing that the lawyer was negligent because s/he failed to exercise the skill and care that a reasonably careful attorney would exercise under similar circumstances (See Civil Jury Instruction 600).  Also instructive is Rule 3-110 of the California Rules of Professional Conduct (“CRPC”) which provides that a lawyer violates of the rules of the profession when s/he intenti

onally, recklessly, or repeatedly fails to act with competence when providing legal services.  The Rule further defines competence as “the 1) diligence, 2) learning and skill, and 3) mental, emotional, and physical ability reasonably necessary for the performance of such service.”

As with other negligence claims, the plaintiff in a California legal malpractice case must demonstrate that harm resulted from the breach of duty.  This is important because it typically means a plaintiff must show that a competent attorney would have gotten a different result.  This is often referred to as “the case within the case” since the plaintiff typically needs to prove the original case in addition to the occurrence of legal malpractice.

Examples: What Is and Is Not Legal Malpractice

Legal malpractice is serious.  Simply getting a bad result on a good case does not mean the attorney committed malpractice.  The following examples may help clarify:

Why do we handle legal malpractice claims?  We do so because we believe lawyers owe a duty to their clients and because we hold ourselves and our fellow professionals to a high 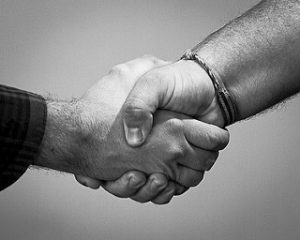 Call (800) 427-7020 or use the contact form on this page to learn more.  We offer a free evaluation and consultation to all potential clients.

(Photo by Clyde Robinson of work by Jason Luper; Image of handshake by dhendrix73)