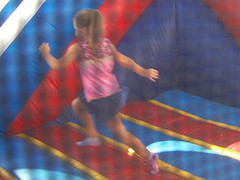 From birthday parties to town fairs, bounce houses are a surefire way to make a child’s eyes light up. Somehow the same equipment that leaves many an adult with an upset stomach and a dizzy head makes children laugh and scream with glee. There are few joys as sweet as listening to kids have that much fun and it’s especially refreshing when modern day kids are enjoying something physical instead of staying “plugged in” and glued to a digital screen. Unfortunately while bounce houses are great fun, bounce house injuries are a very real danger and a concern to our San Francisco child injury attorney.

CPSC Reports on Increasing Number of Inflatable Amusement Injuries
Recently, the Consumer Product Safety Commission (“CPSC”) released a study looking at injuries associated with inflatable amusements. The study focuses on the ten-year period from 2003 through 2013 and looks at injuries tied to air-filled structures that use one or more blowers to provide a continuous air flow. Bounce houses, also called moon bounces or space walks are the most common type of inflatable amusements with slides, obstacle courses, and other games also falling into the category. Importantly, although they are quite similar, the report does not cover smaller structures that are only inflated once per use. Researchers used injury data from emergency room codes provided by a sample group and then extrapolated to create nationwide estimates.

From 2003 through 2013, there were an estimated 113,272 injuries associated with inflatable amusements treated in emergency rooms nationwide. A whopping 93% of these were tied to moon bounce style equipment. Children between the ages of 5 and 14 accounted for 61% of the injuries and 88% involved youths under age 15. The CPSC reports 12 deaths associated with inflatable amusements, 5 involving inflatable slides and 4 involving bounce houses. Many of the deaths involved head and/or neck injuries
The CPSC reports a statistically significant increase in inflatable amusement injuries in recent years. Seventy-three percent of the total injuries occurred in the second half of the decade-long study period. On average, there were 15,815 injuries annually from 2011 through 2013. This is compared to only 5,311 estimated injuries in 2003 and 6,101 in 2004. The report notes that it is unclear whether the increase is due to an increased injury rate or an increase in exposure (i.e. more people using the amusements).

Safety Tips for Parents Last week, USA Today reviewed the CPSC study and provided some safety tips for parents and other adults to help prevent inflatable amusement injuries. The recommendations include: 1) Always follow the instructions for setting up and using the equipment; 2) Use stakes and other anchors as indicated; 3) Stay alert for changing weather, particularly high winds; 4) Keep younger children away from power equipment, particularly when there is also water nearby; 5) Do not allow younger children to use bounce houses while older (often more physical) children are playing; 6) When the amusement is at a public event, be sure the event operators are licensed and experienced; 7) Have adults supervise children and also have the company supplying the equipment provides appropriate personnel to oversee set-up and use.

Legal Help When Injuries Occur If your child (or you) is injured while using an inflatable amusement, our Northern California bounce house injury attorney can help. There are a number of legal principles that may apply and you and/or your child may have a legal claim based on a manufacturing defect, a failure to provide adequate warnings, too few or poorly trained personnel, inadequate security, or other factors that led to the injury. Call to discuss your unique situation.