At the Brod Law Firm, we are more than a personal injury law office, we are a personal safety law office. We work to get compensation for those who are paying the price for someone else’s negligence, including families of those who paid the very highest price. We are also advocates for safety, encouraging people to take steps to prevent accidents. We believe in preventing people from causing accidents and also helping people avoid becoming victims. Safety tips are rarely perfect, but that doesn’t mean they shouldn’t still be followed, a truth that came to mind as our Santa Rosa pedestrian injury lawyer learned about a recent accident and explored the evidence regarding crosswalk injuries.

Crosswalk Crash Leaves Girl in Critical Condition Last Sunday night, a Santa Rosa family was walking to their car after visiting with relatives when their world was suddenly shattered by a terrible accident. The Press Democrat reports that the father and son had already crossed Petaluma Hill Road in the vicinity of Breeze Way and the mother and 6 year-old daughter were walking hand-in-hand through the crosswalk when tragedy struck. Police say the pedestrian warning lights were activated when a northbound car approached the crosswalk. Reportedly the driver saw the mother and daughter at the last moment and applied his brakes but he still hit the little girl, despite the duo’s attempt to jump out of the way. The child was thrown approximately 25 feet up the road. She was initially taken to Santa Rosa Memorial Hospital and then flown to Children’s Hospital in Oakland. As of Tuesday, she remained hospitalized with critical, life-threatening injuries. An investigation into the crash is underway and the driver is cooperating with police. 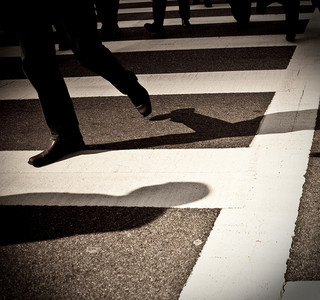 The NHTSA on Crosswalk Safety Despite Sunday’s accident, we strongly recommend pedestrians use (and localities install/maintain) crosswalks. In June 2008, the National Highway Traffic Safety Administration published a National Pedestrian Crash Report aimed at analyzing trends in pedestrian accidents between 1997 and 2006. The research found that only 9% of pedestrian fatalities occurred in crosswalks compared to 80% occurring in roadways. The report concludes: “This indicates that using a crosswalk is the safest way to cross a street.” Many other research pieces and safety guides from the NHTSA echo this sentiment, such as a 2012 Consumer Advisory that urges pedestrians to “walk with care” and use crosswalks whenever possible.

Crosswalk Controversy Perhaps surprisingly, crosswalks are not without controversy. There are groups that suggest crosswalks can be dangerous, pointing primarily to over-confidence on the part of pedestrians. These groups say that pedestrians are too quick to presume a crosswalk will be safe and do not take other appropriate safety precautions (ex. looking for approaching vehicles). We don’t disagree that it is important for pedestrians to watch for traffic whenever crossing a road, but we ultimately agree with the NHTSA that crosswalks, when used appropriately, are a net positive. This does not mean accidents cannot occur, as Sunday’s events show all too well, but we still encourage pedestrians to use crosswalks.

Additionally, some groups use research that points to a higher number of injuries on roads with crosswalks. We would respond by pointing out that crosswalks tend to be placed on busier roads and are unlikely to be found on smaller roads that have less traffic and thus fewer accidents.

Focusing on Safety and Compensation Crosswalks only work when pedestrians use them and drivers respect them. It is too soon and we have too little information to pass judgment on Sunday’s crash. However, the fact that the victim was utilizing a crosswalk can be a key piece of evidence supporting the plaintiff’s case in a personal injury or wrongful death case. If you or a loved one was injured in a crosswalk accident in Northern California, please call our office. Our pedestrian injury law office in Santa Rosa, along with our other locations in San Francisco and Oakland, is here to help you recover compensation from those at fault.

See Related Blog Posts:
Caught on Tape – Using Video Evidence in Support of a California Personal Injury Claim
With Numbers in, 2013 Goes Down as Deadly Year for Pedestrians in San Francisco