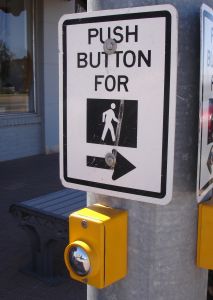 Notwithstanding San Francisco’s recent efforts to curb the number of incidents in which pedestrians have sustained injuries in collisions with motor vehicles, the city by the bay remains a perilous place for pedestrians. And San Francisco pedestrian accident attorney Gregory J. Brod found Thursday’s latest example of another pedestrian suffering injuries while crossing the street particularly troubling because it happened on a roadway that has already seen two other high-profile injuries that made the news this year.

A 20-year-old woman was crossing the intersection of Sunset Boulevard and Yorba Street in the city’s Sunset district when, according to KTVU News, she was struck by a Honda CRV. The woman entered the crosswalk after pushing a button to activate several flashing beacons to alert motorists to stop, which several did, but the driver of the Honda CRV did not stop, noticed the woman too late and skidded into her. The impact between the car and the woman sent the latter spinning to the pavement, and she was transported to the hospital with moderate injuries.

One other pedestrian suffered more serious injuries and another one died at the same intersection, which has six lanes and a center island, earlier this year. In February, a 77-year-old man was struck and killed, and in that same month a teenage boy was hit and sustained head injuries. As in the case of Thursday’s incident, the man who was killed and the teenage boy had pushed a button that triggered the flashing beacon alert system prior to crossing the street.

The city had been planning to install a stop light at the intersection of Sunset Boulevard and Yorba Street in 2016. However, in the wake of the fatality in February, those plans have been moved up by one year.

Sadly, there will probably be several other injuries before 2016 in the Sunset district and elsewhere in the city, and anyone who has suffered an injury after being stuck by a motor vehicle while crossing the street needs to seek effective legal representation as soon as possible. If you or a loved one has sustained an injury or worse after being hit by a motor vehicle, please call the experienced attorneys at the Brod Law Firm for a free consultation.
-James Ambroff-Tahan contributed to this article.