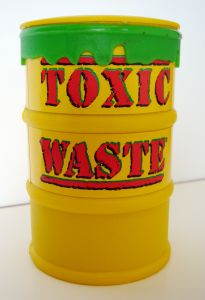 California has some of the toughest standards in the nation on the handling of hazardous waste, with the state’s “cradle to grave” tracking system in place to safeguard the public and the environment by documenting the status of hazardous waste shipped for disposal every year. And yet, Bay Area toxic tort attorney Gregory J. Brod would point out that with the multiplicity of players involved in the process and some 1.7 million tons of hazardous waste disposed of in our state each year one can never be too confident that every single shipment will be dealt with safely.

State’s Tracking System not Immune from Problems
As it turns out, according to a Los Angeles Times investigative report, California’s tracking system is not failsafe and the state Department of Toxic Substance Control cannot account for 174,000 tons of hazardous waste that has been shipped for disposal in the state over the last five years. The DTSC tracking system’s reliance on forms that are often illegible and the inability of data entry contractors to accurately enter information on shipments from those forms has been blamed for misplaced waste. And disposal manifests – the documents required to certify that a shipment was received and properly processed – have gone missing for 1 percent of all loads.

Among the lost loads are some rather alarmingly toxic materials: more than 20,000 tons of lead, which is a neurotoxin; 520 tons of benzine, which is a carcinogen; and 355 tons of methyl ethyl ketone, which is a flammable solvent that has been dubbed by some in the industry “methyl ethyl death.”

Federal standards classify almost 60 percent of the misplaced loads – the state’s database indicate the cargo was shipped but shows no record of arrival at their destination – as hazardous and thus so potentially harmful that they must be regulated in all states. The other 40 percent fall under the stricter standards in California.

With the DTSC’s system not automatically flagging problems, there is already a built-in weakness to an efficient method of tracking hazardous waste disposal. Throw in the fact that seven years ago regulators told the state contractors responsible for entering data on shipments not to bother attempting to make sure the information on all shipments was accurately recorded, and a toxic recipe exists for the fate of tons of harmful chemicals and cancer-causing metals.

Unauthorized or Alleged Improper Disposals in Southern and Northern California
The investigation presented a nightmare scenario of the foregoing that came true in which tons of sewage sludge and contaminated dirt were dumped at a soil-recycling plant in the Coachella Valley that did not possess a permit from the state. Noxious fumes from the plant drifted over a nearby elementary school, sickening children and teachers, and it was only after public outrage and pressure from a U.S. senator that regulators forced the dumping to cease in 2011.

The problem with the proper disposal of hazardous materials has not been limited to Southern California, nor to the shipping process. Indeed, the state Attorney General’s Office, acting on behalf of the DTSC, won a restraining order against a Richmond metal-plating company that requires it to remove toxic wastes from its plant, according to NBC Bay Area News. The state had filed a lawsuit against Electro-Forming Co., accusing the company of illegally disposing of hazardous waste in the street and on property next to their facility. The lawsuit also alleged that the company boiled off liquid plating waste and mixed different types of hazardous waste in a tank.

As we have seen in other circumstances where the public has been exposed to toxic substances, it often takes a significant period of time for victims to become aware of the ill effects of exposure. It is important for those who feel that they may have exposed to toxic substances to seek experienced legal counsel as soon as possible. The legal team at the Brod Law Firm urges anyone who falls into this category to contact them for a free consultation.
-James Ambroff-Tahan contributed to this article.