Saint Louis has its Arch, Philadelphia has the Liberty Bell, New York has its famed skyline, and San Francisco has the Golden Gate Bridge, symbols that people nationwide (or even worldwide) associate with their respective cities. Along with being an icon of the city, Golden Gate Bridge stands out since it is also a heavily trafficked transportation route. While less common that one may expect, accidents on the storied span are a reality. Bridge accidents are particularly frightening and, as a San Francisco auto accident law firm, we encourage the city to move forward with long-delayed plans that may further reduce the accident rate. 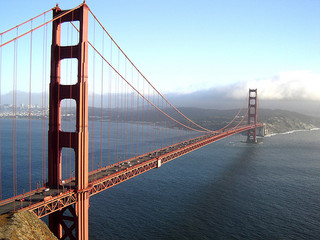 Early Tuesday morning, a strange accident left a car wedged onto the Golden Gate Bridge’s pedestrian walkway. The San Francisco Chronicle reports that Daniel Soto, age 22, was driving drunk when he turned into a parking lot near the span’s north end at 5:10 A.M. California Highway Patrol Officer Andrew Barclay said that Soto then hit the gas, plowing through a security gate and onto the bridge’s west-side walkway. He drove about 400 yards before his Ford Mustang became stuck and his air bags deployed. Police did briefly take Soto to the hospital after arresting him for suspected DUI, taking him into custody after he was released from the hospital. Bridge officials shut down all traffic to bring in a forklift and flatbed truck to remove the vehicle.

Long-Delay In Safety Plans for Golden Gate
In a report on a planned bridge renovation, the Golden Gate Bridge Highway & Transportation District estimates that 40 million vehicles cross over the 1.7 mile-long span each year. A reduction of the speed limit to 45MPH in the 1980s along with the widening of the roadway by 2 feet and increased law enforcement presence substantially reduced the prior accident rate. The latest numbers in the report show an accident rate of 0.61 accidents per million vehicle miles, down from 1.25 accidents per million miles.

Currently, crews manually place plastic tubes into sockets in order to mark the opposing traffic lanes and move them to reconfigure the traffic plan several times per day to address traffic flow. In the 1980s, the District rejected a plan to use a moveable median barrier (“MMB”) system to create a semi-rigid median barrier that would be moved by machine. Technology improved and the District began reexamining the MMB option in 1996, concluding in May 1998 that the system could virtually eliminate crossover accidents and associated delays. Additional studies do suggest the MMB might make it more difficult to clear other accidents such as rear-end collisions. Over time, the District decided to go forward with the MMB plan. Despite the study starting in 1996, the MMB is yet to be installed. Current plans call for construction in January (and the first-ever closure of the span for the weekend).

When Delays Threaten Traveller Safety and the Importance of Experienced Injury Counsel
While Golden Gate crashes are relatively rare, they do happen. In late 2012, the Chronicle reported on a head-on crash that injured three women and caused hours of traffic. Bridge officials acknowledged that at least part of the chain-reaction crash could have been prevented had the MMBs been in place. The article notes drawings for the project had been submitted in 1997 and funding approved since 2007, but the MMB project faced continued delays. Counsel for a woman paralyzed in a 2008 head-on bridge collision called the delay political and compared not installing the MMB to not putting an airbag in a car. A District representative noted that the MMB would eliminate only certain forms of accidents saying “[a]ccidents are not going to go away, but the severity will decrease.”

This week’s crash may not have been prevented by the MMB, but delays in implementing safety-related changes threaten lives and risk injuries. When we work for an injured client, we explore all relevant claims to determine whose actions (or inactions) contributed to the crash. Usually the other driver will be a defendant, but they are not always the only one. Cases that involve potential claims against municipal bodies require precise timing and detailed procedural requirements. This is yet another reason we would advise any accident victim to obtain legal counsel.

If you are injured in a bridge crash or other car accident in the Northern California region, give our office a call. Our San Francisco accident attorney has the experience and the knowledge that can help you get the compensation you deserve.

See Related Blog Posts:
Witnesses Call Into Question the Safety of the Bay Bridge, 4 Months After Re-Opening
A Step Towards Safer Travels on the Golden Gate Bridge