Electric shock drowning is also suspected in an incident in New Jersey that left a man in critical condition.  The San Francisco Chronicle reports that a 34-year-old man was spotted face down in a pool at a motel on the Jersey shore over the Memorial Day weekend.  A teenage boy attempted to save the man and told reporters that his body tensed and began shaking as soon as he entered the water.  A maintenance worker was able to cut the power and pulled the man out of the pool.  As of the time of the report, the man was in critical condition at a Philadelphia hospital.  The motel’s owner says a faulty lamp post may have been the culprit.

What is Electric Shock Drowning and How Can it be Prevented? 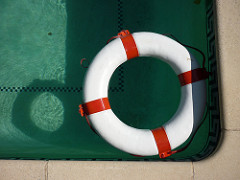 is a 501(c)(3) organization dedicated to educating the public about the dangers of electric shock drowning (“ESD”).  In a downloadable brochure, the group explains that ESD occurs when the victim is paralyzed by electrical currents in the water.  ESD is the result of electricity leaking into a freshwater body (Note: Freshwater conducts electricity better than saltwater.  While the ESDPA focuses on lakes and marinas, ESD has also occurred in pools as in the New Jersey case above).  Often, the problem stems from a dock or a boat with faulty electrical equipment.  It only takes 10 milliamps to cause paralysis or drowning, an amount that is about 1/50th of the current needed to power a 60-watt light bulb.  Sixty milliamps can cause heart failure.

According to the ESDPA, electric shock drowning has been the documented cause of hundreds of injuries and deaths.  The ESDPA suspects there are many more incidents since it often requires a witness report or special investigation to identify ESD.  In the brochure, the ESDPA lists three key ways to prevent ESD:

A Message from our Northern California Recreational Injury Law Firm

Our thoughts go out to the families recently affected by electrical shock drowning.  We work with families confronting grief and dealing with tragic injuries on a daily basis.  We know moving forward is fraught with difficult emotions and, often, a financial toll as well.

If you suspect that ESD harmed you or someone you love in the Northern California region, please contact our San Francisco drowning lawyer.  You may be entitled to compensation if someone else’s negligence (e.g., the manufacturer of a faulty electrical system or a negligent boat owner) created the danger.

Tubing Accidents and a Tragic Drowning at Lake Sonoma