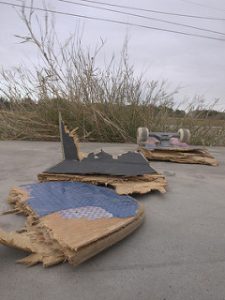 o the Bicycle, Skate and Skateboard Safety Fact Sheet (2016) produced by Safe Kids, a group focused on preventing injuries to children worldwide, 84,414 children aged 19 years and younger suffered skateboard-related injuries in the United States during 2014 (citing data on hospital visits from the Consumer Product Safety Commission).  The group does not report on injuries to adults.  An earlier study published in 2002 by The Journal of Trauma titled Skateboard-Associated Injuries: Participation-Based Estimates and Injury Characteristics found that most skateboard injuries are musculoskeletal (e.g. sprained wrist from a fall), but the more serious injuries requiring hospitalization typically involved a motor vehicle collision.

While it appears that Friday’s accident in Santa Rosa was not caused by driver negligence, crashes between skateboards and cars can have many causes.  Driver negligence and driver inattention are most certainly among the causes of serious and even deadly skateboard accidents.  Other causes might include a dangerous road condition or a defective skateboard.

As always, at The Brod Law Firm, we believe in prevention first.  While many accidents are not the fault of the rider, it is still wise to exercise caution.  The Safety Tips: Skateboarding page on KidsHealth.org, a nonprofit subdivision of The Nemours Foundation focused on improving children’s health, provides a number of suggestions aimed as providing a safe skateboarding experience.  These skateboard safety tips include:

If you or your child was seriously hurt in a skateboarding accident in Northern California and you believe someone else was at fault, call our Northern California recreational injury law firm.  As a skateboarding injury lawyer in Oakland, San Francisco, and Santa Rosa, Attorney Brod can help you and/or your family get justice and recover compensation.

When Adventure Goes Wrong: Compensation for Injuries in Extreme Sports and Adventure Activities

(Image of broken board by Terry Ross; Image of skateboarder by Flickr user phrawr)