Sometimes the outcome of a study leaves us thoroughly surprised. Other studies have results that seem like common sense. While a recent elder abuse study falls firmly in the latter category, it is still a study of great importance. First, our San Francisco elder abuse lawyer believes firmly that any study that forces people to focus on the problem of elder abuse is important. Second, the study presents yet another reason why elder abuse must be considered an important issue by pointing to a major economic cost that impacts victims and our society as a whole. Third, by confirming a suspected link, the study also provides one more “sign,” noting an outcome that should raise suspicions and encourage professionals to consider whether elder abuse may be affecting a particular individual.

The Study: Methods and Conclusions 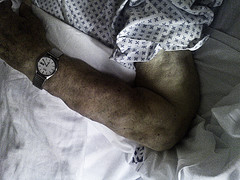 A study published in the April 8 issue of the Journal of American Medical Association and detailed in a press release from Rush University Medical Center concluded that older adults who experience elder abuse or neglect are more likely to be hospitalized than other seniors. Dr. XinQi Dong, the study’s lead author, noted that while elder abuse clearly led to an increased mortality risk, especially due to cardiovascular problems, no prior study had focused on the relationship between abuse and health care utilization in the senior population. His study involved 6,674 community-dwelling seniors (i.e. those not living in a care facility) in Chicago, including 106 whom social services groups concluded were victims of elder abuse between 1993 and 2010.

The study authors also released other details about the studied population. Compared to other study participants, those subject to elder abuse were more likely to be female, black, and have lower levels of both income and education.

Drawing on Research to Combat Elder Abuse and Represent Victims
Commenting on the study, Dong noted that hospitalization is a major contributor to the fast-growing increase in health care costs. He referred to elder abuse as “a serious, common and under-recognized public health and human rights issue,” noting that the field is more than two decades behind the fields of child abuse and domestic partner violence. Dong expressed hope the hospitalization study will allow health care providers to improve screening, intervention, and preventing elder abuse. An additional benefit to reducing elder abuse would appear to be a reduction in unnecessary health care costs.

Staying informed about elder abuse issues helps us to bring the best possible service to elder abuse victims in San Francisco and surrounding communities. If you or someone you love has been the victim of elder abuse in Northern California, please call our office to arrange a free consultation and discuss how we can help abuse victims recover crucial economic damages.