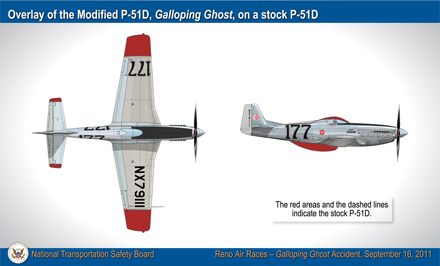 The National Transportation Safety Board (NTSB) announced on August 21, 2012 that it has opened to the public its docket relating to a September, 2011 incident in which the “Galloping Ghost” aircraft crashed into spectators at the Reno National Championship Air Races. The crash killed 11 people and seriously injured another 66.

On August 27, it unveiled its analysis of the crash. According to the NTSB report, the pilot of the P-51D Mustang, Jimmy Leeward, made several extensive modifications to the plane without testing or reporting them to Federal Aviation Administration (FAA) as required. The modifications successfully reduced drag on the plane by making it lighter, but also destabilized the flight controls. Between pylons 8 and 9 of the course, Leeward lost control of the plane when it succumbed to “aerodynamic flutter“.

During flutter, aerodynamic forces act on the vibration of the plane’s structure, causing it to oscillate. In this case the structure of the plane was not stiff enough to resist the forces and combine with airspeed of 512 MPH the plane started to oscillate, or flutter. As the plane took on a life of its own, the plane jolted upward and the gravitational forces reached 17.3 G’s, knocking Leeward unconscious. The plane had been modified with used screws and bolts, which failed within seconds of the plane’s initial pitch higher into the air. Then, the plane plummeted to the ground and right into the spectators and sent debris flying into the crowd.

The NTSB concluded that the weak screws and questionable modifications contributed to the flutter in the first place. The NTSB pointed out that while Leeward took risks as a stuntman and racer, the crowd reasonably believed that the organizers had assured their safety. As early as April of this year, the NTSB released recommendations to the FAA, the Reno Air Racing Association, and the Unlimited Division of the National Air-racing Group, which all had a hand in the event. As of August 22, all three entities accepted the NTSB’s recommendations. The recommendations to the racing groups were:

The Reno crash of the Galloping Ghost was caused by risky behavior and lack of oversight. Retroactive safety precautions come too late for the families affected by the tragedy. The Brod Law Firm would like to express our deep sympathy for the injured and the families of those taken away too soon, including pilot Jim Leeward. San Francisco attorney Greg Brod specializes in negligence claims and personal injuries of all kinds. Please contact the Brod Law Firm today for a free consultation.