In a noxious introduction to a little-known chemical, 300,000 residents of nine counties in West Virginia were left without most of their drinking water Thursday after a storage tank ruptured at chemical plant, spilling 5,000 gallons of MCHM, or 4-methylcyclohexane methanol, into the Elk River. And San Francisco toxic tort attorney Gregory J. Brod would remind us that the disaster in the Mountaineer State, while local, has unsettling implications elsewhere in the nation.

According to The New York Times, the chemical spill occurred at a chemical plant owned by Freedom Industries that is located upstream from the West Virginia American Water Company, which supplies most of the household water in Charleston, the state capital, and the surrounding area. Because the contaminated water had already invaded the water company’s distribution system, the company’s entire system has to be flushed, a process whose timeline is undetermined at this point.

On Friday morning, residents learned that their tap water was unsafe for routine uses such as drinking, brewing coffee, brushing teeth or bathing, and local stores quickly ran out of their supplies of bottled water. But residents of Kanawha County, where Charleston is located, smelled a telltale sign that something was amiss the day of the spillage, when many reported a foul oder – similar to licorice – in the air. The National Guard had to supplement water supplies with shipped-in tankers of water that residents could take home in jugs.

Area schools were closed and businesses such as restaurants and hotels were effectively shut down. The state’s governor, Earl Ray Tomblin, ordered a ban on drinking, bathing and cooking with tap water in Charleston and nine surrounding counties. The federal government joined the governor in declaring a state of emergency in West Virginia. 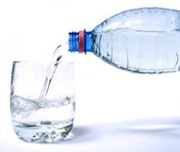 MCHM is used in the mining industry to wash coal, and its spillage into a river from a ruptured storage tank is a direct, obvious and nightmarish source of pollution. However, there are more insidious sources of water pollution that can emanate from extractive industries and are as much a cause for concern. And in the western United States, there is particular cause for worry, as the U.S. Environmental Protection Agency estimates that 40 percent of all the watersheds in the region are impacted by mining pollution, including residual mercury and acid mine drainage. The drainage occurs when acidic water leaks from mines, either active or inactive, when freshly extracted minerals are exposed to air and water.

The spillage of a toxic chemical used by an extractive industry such as coal mining is also a reminder that the current boom in the oil and gas industry as a result of enhanced drilling techniques – particularly hydraulic fracturing and its close cousin acidizing, which employ water and chemicals to separate hydrocarbons from rocks – are a cause for concern in states such as California where the new techniques are very much in evidence.

As is often the case where a toxic tort is involved, the negative health consequences of a chemical spill are often not seen in its victims until a significant period of time has elapsed. Nonetheless, experienced attorneys in the toxic tort practice area such as the lawyers at the Brod Law Firm are effective advocates for those who are sickened by a chemical spill. If you or a loved one has become ill due to a chemical spill, please call the legal team at the Brod Law Firm for a free consultation.
-James Ambroff-Tahan contributed to this article.