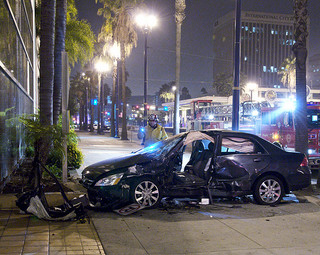 The scene in Walnut Creek sounds almost too dramatic; the horrific death and injuries sound almost too terrible. Sometimes reality is more extreme than the most over-the-top, made-to-scare (or, perhaps, “scar”) drivers’ education video. As a law firm with specific experience helping victims of the most catastrophic accidents, The Brod Firm knows that no exaggeration is needed when we warn people that reckless driving kills. Reality provides plenty of evidence that treating cars or motorcycles as toys leads to tragedy. The clients of our Oakland accident law firm are the victims of reckless driving and every one of them wishes that the drivers who caused their accidents had heard this message in advance of the crash.

Motorcycle and Car Collide on I-680
The Oakland Tribune called it “[a]n exhibition of dangerous driving,” a major accident that killed one, seriously injured another, and tied up a Walnut Creek thoroughfare for two hours on Sunday evening. Witnesses report that both a motorcycle and a black two-door coupe were travelling at a high rate of speed on a stretch of Interstate 680 just north of Alamo. One witness added that the motorcyclist appeared to be attempting tricks while racing with the coupe, travelling with his right hand on the bar and his left placed on the seat while looking behind him.

The wreck occurred at 5:48 P.M. According to Sgt. Franco Dalao of the California Highway Patrol, an investigation is ongoing but speeding and reckless driving are being looked at as likely factors given the witness reports. The wreck killed the motorcycle rider, dismembering his body and leaving parts of his motorcycle strewn across a quarter-mile of I-680 between Livorna and Rudgear roads. A resulting fire consumed and destroyed the coupe. Responders transported the driver to John Muir Medical Center for treatment of serious injuries.

Considering the Danger of Reckless Driving
The team at our Northern California accident law firm was struck by the experience and wisdom contained in a comment Sgt. Dalao made to reporters in the wake of Monday’s crash. Discussing the long traffic back-up following the crash and the resulting ninety minute road closure, he said “We hope that the people who are having to sit through this are reminded that the roadway is a dangerous place and why it’s vital to be cautious instead of aggressive.” The potential danger on the roadway is evident in crash statistics. According to the Traffic Crash Statistics Report 2010 from the Florida Department of Highway Safety and Motor Vehicles, compiled based on information from law enforcement reports, there were 235,461 crashes on Florida’s roadways in 2010 (including motorcycle crashes). These crashes resulted in 195,104 injuries and 2,444 fatalities.

We represent the victims of Oakland reckless driving crashes, both the tragically injured and the families grieving a lot loved one. We help these victims pursue vital monetary compensation in the wake of a tragic accident. We also believe in reminding the community about the importance of safe, responsible driving. We are proud of this two pronged approach of prevention and representation, an approach that we believe will help keep Californians safe and their legal rights protected.