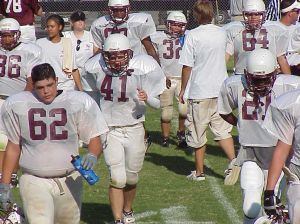 Last week on these pages we discussed how, as high school sports have become an increasingly competitive pursuit, the number of serious sports-linked injuries have also increased. However, according to a recent report in the San Francisco Chronicle, the increasing tendency for youths to concentrate on one sport for longer periods of time has loomed as another reason for the surge in youth sports injuries, a development that has our personal injury attorney particularly concerned.

As the article in the Chronicle suggested, the quest for sharper skills as well as scholarships and college success has been a driving force behind the focus on one sport among youths. Unfortunately, this trend has translated into repetition, more strain and thus more injuries. Indeed, injuries blamed on overuse are responsible for half of all sports injuries among middle and high school students, with specialization a likely cause. And there has been a startling five-fold increase in the number of serious elbow and shoulder injuries to youth baseball and softball players since 2000.

A closer look at the statistics on youth sports injuries supports the notion that the trend toward specialization has had some negative physical consequences for its participants. A report in USA Today graphically illustrated that 1.35 million youths a year sustain serious sports injuries that are diagnosed in emergency rooms in the United States. The most common injuries that triggered ER visits in 2012 were, in descending order, 451,480 for strains or sprains, 249,500 for fractures, 210,640 for contusions and abrasions, and 163,670 for concussions. During 2012, football and basketball vied for the highest number of injuries among athletes age 19 and under, with the former responsible for 394,350 injuries and the latter 389,610 injuries. The next closest popular sport to be linked to an ER-treated youth injury in 2012 was soccer, with 172,460 injuries. Not surprisingly, football was responsible for the highest number of concussions – 58,080 – among athletes age 19 and younger in 2012, with 47 percent of all youth sports-linked concussions sustained by those youths age 12 to 15.

The Lucile Packard Children’s Hospital at Stanford has compiled some other unsettling statistics concerning youth sports injuries in the United States, including these:

Our children and teenagers our precious to us and while their participation in sports is one of the joys of youth, we also want them to pursue this endeavor in as safe a manner as possible. In the event that you or someone you love has sustained a serious sports injury such as traumatic brain injury, we want you to know that Gregory J. Brod has the necessary experience and sensitivity to represent you, and he urges anyone whose children have sustained a serious sports injury to contact the Brod Law Firm for a free consultation.
-James Ambroff-Tahan contributed to this article.