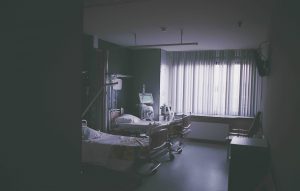 The family of an elderly Korean War veteran, Robert Hopkins, who passed away after falling from his hospital bed, has filed a lawsuit against Valley Convalescent Hospital located in Bakersfield, California. The family is citing neglect as the cause of their loved one’s wrongful early death. Specifically, the family is asserting that the nursing assistant employed by the facility failed to properly set a side rail on Hopkin’s bed, which led to a fall from his bed. This particular fall, which turns out to be one of nine Hopkins suffered after being admitted to Valley Convalescent, led to a broken vertebrae. He died approximately a week later. California’s Department of Public Health (CDPH) determined the fall from his bed caused Hopkin’s death and fined the medical facility.

Evidence that Hopkins suffered nine separate falls from either his hospital bed or wheelchair, and that his wife was not aware of all of these falls prior to his death, points to a lack of proper care. Medical facilities that care for elderly patients are well aware of their patients’ mobility issues and the increases risk of fall. These medical professionals should also be aware of the high risk of injury and death related to falls and take care to prevent as many falls as possible.

There were additional signs of neglect too. After being admitted to Valley Convalescent, Hopkins suffered multiple strokes and had to have his right leg amputated below the knee due to diabetes’ complications. While all of this could be attributed to his age and condition, it is possible he did not receive proper care for his diabetes.

Hopkins also developed bedsores and other skin conditions on his back, the back of both of his arms, and the back of his left leg due to being kept in the same position for too long. While bedsores are a risk for certain types of patients, they are not a normal part of aging or of living in a nursing home. Individuals who are not able to be mobile themselves must be properly bathed and repositioned to avoid bedsores.

Valley Convalescent has a record of violations. In 2017 alone, the CDPH has found 28 deficiencies after receiving eight complaints and seven self-reported incidents, one of which included an employee abusing a patient. Since 2003, CDPH has fined the facility more than $160,000 for violations.

Are You Worried About Your Elderly Loved One?

If your elderly spouse, parent, or sibling is living in a nursing home and you believe their health is suffering due to neglect or abuse, contact our experienced California elder abuse lawyers of Brod Law Firm at (800) 427-7020 immediately. We are here to review the situation and advise you and your loved one on your rights. If there are signs of neglect, we can work with state authorities to improve the situation. If your relative has suffered an injury, we can review their right to bring a personal injury claim against the facility.