For decades, cheerleaders were about just that – leading cheers.  They played a secondary role, bringing energy to the sidelines, drumming up team spirit, and supporting the athletes on the field.  Today, cheerleading also has a competitive side, requiring mastery of skills from the worlds of gymnastics and dance.  As competitive cheerleading grows in popularity, debates rage about whether to recognize it as a sport in its own right.  This movement is fueled by both the athleticism required for competitive cheerleading and concerns about serious cheerleading injuries.  As a San Francisco sports injury law firm, we are devoted to protecting and advocating for all young athletes, including those fighting to move from the sidelines to center stage.

Bill to Label Cheerleading a Sport Moves to Governor’s Desk

On Monday, as detailed by NBC’s Bay Area affiliate, California’s state senate unanimously voted to require the California Interscholastic Federation to treat competitive cheerleading as a sport.  Assemblywoman Lorena Gonzalez, the bill’s sponsor, says the need for safety-oriented regulations including training requirements for coaches is fueling a nationwide movement to formally recognize the sport.  AB949 will now go to Governor Brown’s desk for his signature or veto.  If passed, the bill would require the change be implemented by the 2017-2018 school year.

A 2013 article from U.S. News and World Report opens: “Cheerleading is definitely not your grandmother’s pastime anymore, injury experts warn, but rather a highly competitive activity that’s light on the pom-poms and heavy on risky daredevil acrobatics.”  Cheerleaders compete year-round, putting on dazzling displays of acrobatic prowess.  According to the American Academy of Pediatrics (“AAP”), the number of participants ages 6 and older who cheer at school or with an offsite team skyrocketed from 600,000 youths in 1990 to somewhere between 3 million and 3.6 million participants in 2003.

According to the article, the AAP officially endorses reclassifying cheerleading as a sport, a position largely motivated by safety concerns.  Although the overall injury rate is low compared to other girls’ sports like soccer and basketball, cheerleading accounts for a whopping 60 to 70 percent of the catastrophic injuries among female high school athletes.  The rate of injuries increases with participants’ age and skill level as cheerleaders undertake increasingly complex stunts.  U.S. News reports that injuries range from basic sprains and strains to concussions and even death or permanent disability.  Reclassification’s opponents suggest cheerleading is already becoming safer and point to raw figures showing only a small number of catastrophic injuries per year.

Designating cheerleading as a sport would bring an increase in resources and regulation.  Cheerleaders would be required to participate in strength and conditioning workouts before and during the competition season.  Participants would be protected by onsite medical staff and coaches certified in teaching and spotting proficiency.  Squads would also have emergency medical plans in place.  The AAP also calls for specific limits on certain activities such limiting the height of human pyramids and banning tumbling on hard surfaces.

Protecting Cheerleaders and Other Youth Athletes

As a San Francisco youth sports injury law firm, we believe it is up to adults to protect all young athletes, a group that we believe includes competitive cheerleaders whether or not the activity is formally deemed a sport.  When injuries do occur, it is up to adults to look closely at and learn from the incident.  We believe that, even amid the increasing demands placed on young bodies, sports and other athletic endeavors can become safer.

Certainly, not every turned ankle should lead to a lawsuit.  Frivolous litigation does not help anybody; in fact, it diverts attention from legitimate safety measures.  Sometimes, however, youth injuries are the result of adult negligence.  In these cases, such as when defective equipment or poorly trained staff cause or contribute to cheerleading accidents, the responsible parties should be held legally accountable.  Doing so helps bring about change while providing critically needed compensation for a young person who may be facing lifelong challenges.  If your child suffered a serious cheerleading or other sporting injury that you believe stemmed from adult negligence, call to schedule a free consultation to discuss whether you may have a legal claim. 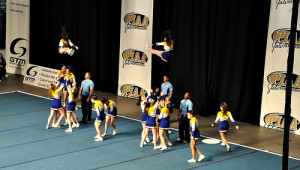 (Both images by Joshua Effrece)