The motorcycle crash occurred when the officer was en route to an accident at Sixth and Stevenson.  There, a pedestrian was crossing the street when he was hit by a 2008 Porsche Boxer.  Witnesses report the man hit the car’s windshield before falling and briefly being pinned underneath the car.  He was taken to the hospital but, at the time of this writing, there was no information on the pedestrian’s condition.

Pedestrians and motorcyclists can take many steps to ensure their own safety, 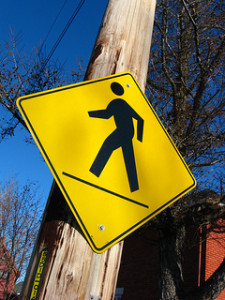 but they always remain vulnerable to the actions of the drivers around them.  One negligent driver can kill a pedestrian or motorcycle rider or leave him/her seriously injured.  According to the Traffic Safety Facts Overview published last month by the National Highway Traffic Safety Administration (“NHTSA”), 2013 saw 4,668 motorcyclists die and approximately 88,000 suffer injuries in traffic incidents nationwide.  Further, 2013 saw 4,735 pedestrian deaths and an estimated 66,000 pedestrian injuries.  Taken together, 9,403 pedestrians and motorcyclists account for 28.7% of the 32,719 people killed in traffic crashes reported to police in 2013.  Notably, pedestrians and motorcyclists accounted for merely 6.7% of all traffic injuries.  Taken together, we believe these figures point to the increased likelihood that a person on foot or on a motorcycle will die in a crash compared to better protected occupants of cars and trucks.

An Advocate for the Injured and Grieving

Our law firm fights for the injured and the grieving.  Attorney Greg Brod is an experienced advocate for both pedestrians and motorcyclists injured in accidents in Northern California, with particular experience advocating for the catastrophically injured.  While most accident cases are resolved prior to trial, Attorney Brod always keeps the potential for trial in mind as he works with clients and negotiates with opposing parties.

Remember, the insurance company is not on your side and you do not have to accept their initial offer.  Tell the insurance company or the person at fault that you will be represented by an attorney and call our San Francisco personal injury law office to schedule a free consultation.  Most accident cases are handled on a contingency fee meaning we only get paid if you recover.