As a member and supporter of the San Francisco and Marin County Bicycle Coalitions, Attorney Greg Brod knows the countless benefits of bicycling, including the extensive health benefits to the rider and the environmental benefits that help keep all of us healthier. As a San Francisco bicycle accident attorney, Greg Brod sees the tragedies associated with riding on two wheels, especially in a society focused on four wheels. This is an upsetting contrast and a true problem evidenced by both injury crashes and the great loss associated with fatal bicycle crashes. These tragic fatalities are the focus of today’s post.

Fatal Bicycle Crash in South of Market Neighborhood
A short article in this week’s San Francisco Chronicle focused on the death of a 24-year old woman from San Francisco. Amelie Le Moullac was riding her bike in the South of Market neighborhood, travelling east on Folsom Street just past 7 o’clock on Wednesday morning. She was in the bike lane when an eastbound truck hit her while it was attempting to turn right on Sixth Street. LeMoullac succumbed to her injuries and was pronounced dead at San Francisco General Hospital. Officer Tracey Turner reported that the truck driver, who remained at the crash scene, was not cited. 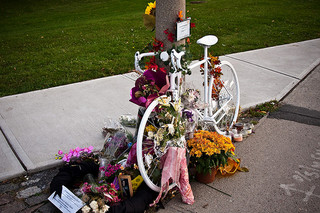 The National Highway Traffic Safety Administration’s (“NHTSA”) Traffic Safety Fact Sheet (2011 Data) for Bicyclists and Other Cyclists cites a total of 677 bicyclist deaths in 2011. While this is an increase from the 623 deaths in 2010, it is a substantial improvement over the 786 fatalities in 2005, the worst year for cyclists in the past decade. California saw the second-highest number of cyclist fatalities for any state with 114 deaths (4.1% of the 2,791 total traffic fatalities).

Bicycling.org notes that bicyclists are over-represented in crash fatalities nationally since they make up nearly 2% of fatalities but only 1% of overall trips. However, the latter is a hard statistic to be certain about since there is no reliable source for the overall rate of bicyclist’s exposure to traffic (i.e. total miles travelled annually). This means it is difficult to compare biking to other forms of transportation.

Focusing on riders, the average age of cyclists involved in fatal crashes was 43, an age that has steadily increased in the past decade. Based on population numbers, those aged 45-54 had the highest fatality rate. Notably, the 16-20 year old group had the highest injury rate. The vast majority of cyclist deaths involved males (85%). Twenty-eight percent of cyclists killed in 2011 had a blood alcohol concentration above .01 and 23% had a rate over .08.

Advocating for Cyclists as Law Firm for Northern California Bicycle Riders
If a cyclist you love was the victim of a fatal crash caused by a careless driver, you may have a wrongful death claim. We work with clients throughout Northern California, as Attorney Brod is proud to serve as a San Francisco, Sacramento, and Oakland bike accident lawyer. Call to arrange a free meeting to discuss the facts of your loved one’s accident, the applicable law, and the potential claims you may have against those responsible.

(Photo by Robert Fairchild; “ghost bike” with flowers is part of memorial to a fatal crash)