Eating healthy has never been so easy…or so hard.   Thanks to the Internet and increased access to information about nutrition and other health topics, consumers have a wealth of information at their fingertips.  Still, sometimes all that information becomes overwhelming, especially with more products appearing on store shelves making a wide range of promises.  Useful and accurate labeling is critical to enabling consumers to make informed choices.  Food labeling lawsuits allow consumers to fight back when companies make false and potentially dangerous promises.  As a food safety law firm in San Francisco, the Brod Law Firm believes consumers must be able to trust food labels and rely on companies to produce safe foods that live up to company promises.

Last week, the Supreme Court of California issued an important ruling in favor of consumers in a food labeling lawsuit.  At issue according to NBC7 was whether consumers could file suit in California alleging that a product was falsely labeled “organic.”  A lower appeals court had ruled such suits were barred by federal law which typically supersedes state law.  That decision, handed down in 2013, held that Congress intended that government officials would be solely responsible for policing the term in order to create a uniform national standard.

NBC explains that the underlying case involved allegations that a large herb company labeled products “100% organic” that actually contained a mix of both organic and non-organic herbs.  Filed as a purported class action, the suit seeks to represent thousands who paid premium prices in reliance on the allegedly inaccurate labels.  The company argued that it had been authorized by federal authorities to use the term while the plaintiff cited California Department of Public Health guidance that items labelled “100% organic” must contain only organic ingredients, meaning all ingredients were produced via sustainable practices and did not involve the use of synthetic fertilizers, genetically engineered products, irradiation, or sewage sludge.  As a result of the ruling, the herb labeling suit will be reinstated and allowed to proceed. 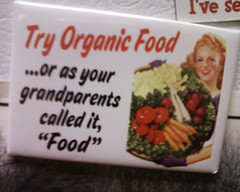 The Growing Market for Organic Food

Consumer demand for organic goods continues to grow.  According to the Organic Trade Association (“OTA”), sales of organic products (both food and non-food items) hit $39.1 billion in 2014, a new record that represents an 11.3% increase over 2013 purchases.  In the food sector, organic items accounted for 5% of the total food market, another record.

Why do people buy organic?  The OTA touts health and environmental benefits of organic products.  On the health side, the industry group says organics reduce the exposure of food workers, their families, and consumers to potentially toxic chemicals and cites evidence that organic foods provide nutrition without the risks associated with nitrates and pesticides.   Although noting that the issue is still being debated, the OTA suggests that “evidence is mounting that there are some healthier nutritional profiles linked to consuming various organic products.”  Further, the OTA suggests that organic products not only protect but also improve the environment.

Consumers should be able to rely on product labels, especially when it comes to food.  Labeling fraud not only endangers consumer’s wallets, it threatens their health and the health of their children.  Health experts urge consumers to pay attention to the products they buy, but that attention is meaningless if labels are inaccurate or deliberately misleading.  Food labeling lawsuits address a range of issues from the use of terms like “organic” and “natural” to whether a food contains potentially lethal allergens.

If you have been misled by a food label, fight back.  We can help you get compensation and we can help you effect major change, protecting consumers in California and nationwide.  Call our San Francisco food labeling law firm to learn more.