For many women, and an increasing number of men, a day at the spa is a small luxury that leaves them relaxed and feeling attractive.  Nail salons and spas offer a wide range of services, especially if you include so-called “health spas” in the mix.  Recently, a news story brought national attention to an extreme service offered at some spas after an employee died while using a treatment device that is increasingly popular with athletes and celebrities.  However, the risks lurking at salons are not limited to the more unusual services.  The danger of spa and nail salon injuries is very real, lurking behind even popular, wide-spread services like manicures and pedicures.  As a salon injury lawyer in San Francisco with additional salon injury law offices in Sonoma and Oakland, Attorney Brod is prepared to help individuals who went to a spa seeking bliss and instead found injury and pain.

An Associated Press (“AP”) report carried by SFGate.com details the disturbing death of a young spa employee in Las Vegas.  According to the article, a fellow employee found the 24-year-old woman frozen to death inside a cryotherapy chamber earlier this month.  It appears the deceased used the chamber after closing a day prior.  Cryotherapy involves putting users into a chamber for just a minute or two and using liquid nitrogen to achieve sub-zero temperature.  Proponents, including athletes, say it can relieve post-exercise pain, improve healing, and increase circulation.  Some salons also tout the treatment as a weight loss aid and anti-aging remedy.

The AP reports that cryotherapy and other treatments are largely unregulated.  However, authorities say the spa where the woman died did not have licenses needed to perform cosmetic procedures.  One official said the application had been denied three times this year due to failure to pay certain fees.  No criminal investigation is expected.  The woman’s family suggests that her death was due to an equipment malfunction, disputing reports that operator error and noncompliance with regulations led to the tragedy.  Both locations of the spa are currently shut down with regulators citing a failure to provide proof of workers compensation coverage and other violations. 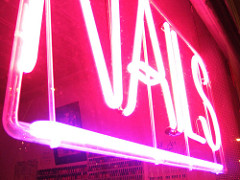 Cryotherapy probably seems extreme and even dangerous to most of us, but the issue of spa and salon safety is much broader than that.  The September 2012 issue of Consumer Connection, a California Department of Consumer Affairs publication, cites a 2005 Centers for Disease Control study that tested 18 nail salons in five
California counties and found mycobacteria in 29 out of 30 samples footbaths.  Making the numbers more real, the article also reports that in fall 2000 officials received multiple complaints regarding a large outbreak of skin boils that were traced to a California nail salon’s failure to properly clean a foot bath used for pedicures.

Most nail salons and spa injuries are relatively minor and would be unlikely to justify an individual action, but extreme cases exist.  A 2014 article in U.S. News & World Report presents the story of a woman who needed surgery to address a severe infection following a pedicure.  The article notes that deaths stemming from salon visits have been reported, citing the story of a California woman who alleges her daughter died from an infection picked up at a nail salon.  More common problems, according to the article, include: Infections (including infections following a small nick during a procedure); Nail fungus; UV ray exposure (during nail drying/hardening processes); and Respiratory Irritation.

How can customers do to stay safe?  Make sure your salon is properly accredited and follows all sanitation regulations.  Ask about disinfection procedures. Consider insisting on the use of an autoclave to clean instruments.  If you go regularly, consider bringing your own tools.  Choose procedures wisely and skip risky (and sometimes illegal) parts of common procedures such as the use of a razor to take down calluses or the cutting of cuticles during a manicure or pedicure.

In recent years, California has made important strides in protecting salon workers.  We applaud these steps but urge regulators and industry groups to make sure that customer health is not neglected.  The law must protect consumers from salons that cut corners and must keep up with new technologies.

If you have suffered a significant injury at a Bay Area nail salon or spa, call our spa injury law firm in Santa Rosa, San Francisco, or Oakland to learn about your rights.  Likewise, if you believe you are part of a group injured in a large outbreak or other safety failure impacting numerous patrons, our experience as a Northern California class action law firm can help you recover compensation and affect meaningful change.