NBC now reports that the state’s Public Utilities Commission (“PUC”) says that the bus’s license plates did not match the vehicle and actually belonged to another bus from the same company.  Further, the PUC states that there is no evidence the bus underwent required inspections nor had the company told the PUC they were adding a bus into service.  Per NBC, the agency spokeswoman also stated that various law enforcement agencies are working to determine if the plate switch was a deliberate attempt to avoid inspection rules.  Meanwhile, the company released a statement saying they inspect their vehicles at least every 45 days and that the vehicle involved had been inspected last month and is registered with the DMV. 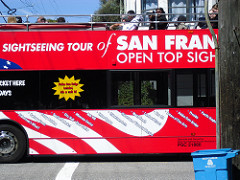 According to the 2015 Pocket Guide to Large Truck and Bus Statistics, published by the Federal Motor Carrier Safety Administration (“FMCSA”), buses travelled 15,167 million miles in the U.S. during 2013, a figure that has been steadily rising in recent years.  The pamphlet states there were more than 5.6 million total crashes nationwide in 2013 with some 66,000 involving buses.  Breaking these numbers down further, out of 30,057 fatal crashes nationwide in 2013, 280 involved buses and out of more than 1.59 million injury-causing crashes, 18,000 involved buses.  Overall, the FMSCA reports that 310 people died in bus crashes in the U.S. during 2013.

Although the FMSCA study reports statistics on bus accidents per million miles, it does not appear to compare those figures to the same statistics for passenger cars.  Citing the Journal of Safety Research (abstract only), a 2013 compilation report “Bus crashes in the United States: What does the Research Say?” by the Harvard-affiliated Journalists’ Resource states there are 3.04 accidents for every million miles driven by buses, a figure comparable to the 3.21 accidents per million miles driven for cars.  The original journal’s authors conclude that while bus accidents are a relatively small percentage of total vehicle accidents, “buses are not, by some measures, necessarily safer than cars.”  The website also cites a federal agency that found “buses and other commercial motor vehicles (CMV) have a higher likelihood of fatal accident involvement per registered vehicle.”

Bus accidents often epitomize the lack of control felt by anyone involved in an accident that was not his/her fault.  As a San Francisco tour bus accident law firm, we can hone in on the cause of accidents and discover where fault lies.  Whether a bus accident is due to a careless company, a negligent driver, another party, or, as is often the case, some combination thereof, we can help the injured and grieving recover compensation for an accident caused by someone else’s negligence.  Contact us at (800) 427-7020 or via our electronic form to arrange a consultation with our experienced accident attorney.

(Image by Flicker user A National Acrobat; Image does not reflect bus or company involved in crash)