As stated many times on this blog before, it is the Brod Law Firm’s firm belief that the rules of the road must be followed by all users, whether motorist, pedestrian, or cyclist. All too often, especially in the Bay Area where residents enjoy various means of transportation, we have seen individuals failing to follow simple safety rules, leading to injuries both minor and more serious, as well as fatalities. We again, saw this a month ago in San Francisco in an unfortunate collision between a bicyclist and a garbage truck.

Twenty-one year old Dylan Mitchell was riding along 16th street going east when the collision occurred. Mitchell, who was not wearing a helmet, was fatally struck by the garbage truck of Recology when it made a right turn to turn onto South Van Ness, leading to Mitchell colliding with the rear end of the truck. This all occurred at approximately 6:45 a.m. Police say the truck driver stopped and is cooperating with authorities and that additionally, drugs and alcohol do not appear to be a factor in the incident. 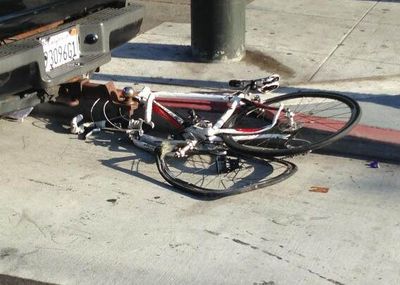 Picture Rights: KTVU Staff/Tara Moriarty
Witnesses to the scene describe the scene as occurring very quickly. Bystanders are of the opinion that Mitchell was travelling much too quickly to be safe and that the truck had a green light. As of right now, no fault has been placed on either party.

Just two months ago, another Recology garbage truck was involved in an accident. A grandmother and her 7-year-old granddaughter were hit on the crosswalk of Broadway and Embarcadero, crushing the girl’s foot.

For over a year now, efforts have been made for a new safety program that would hold errant cyclists more accountable and strive for safer travel in the city. This came on the heels of a collision between a bicyclist and elderly pedestrian which led to the 71-year-old pedestrian’s death. The new Safe Streets Program combined community education and enforcement in hopes of raising awareness of safe travel. The program may also provide a provision that would allow cyclists to pay lower traffic fines in exchange for taking a safety class. While not all of the rules of this program have been worked out, it is expected to start in the fall.

The San Francisco area has seen a great increase of both bicyclists, as well as bicycle accidents. Last year alone, 29 pedestrians were hit by bikers, leading to two deaths. Of these 29 instances, 10 were the fault of the pedestrian. The other cases were due to violations by the rider, including failure to yield, riding at excessive and unsafe speeds, and running red lights. While this does not compare to the number of accidents involving automobile vehicles (over 800 last year), these numbers are still distressing.

There is a tension between the various users of the road but it is extremely necessary for drivers, cyclists and pedestrians to communicate well with one another and yield to one another. Safe travel includes a respect and for other users as well as respect for the rules of the road. Below are safety tips as stated by Bicyclist SF and SF Bicycle Coalition.

Rules of the Road for Cyclists

• Pedestrians always have the right of way • Stop behind the crosswalk • Obey all signs and lights • Be sure to have lights either on your person or on your bicycle at night. Visibility is a big factor in safety • Wear a helmet • Use hand signals • Do not weave in and out of lanes • Make eye contact with drivers
The Brod Law Firm is dedicated to safety. However, we understand that individuals are only able to control their own actions to follow safety rules. If you have been in an accident and believe the other party failed to observe the rules set forth by law, our firm is here to help you seek justice and compensation for your injuries. Call today to speak with us for a free consultation.