Sports is an important part of American culture, a truth that is never more evident than in the fall when baseball is moving towards its championship and football, college and professional, is just beginning.  Far too frequently, however, we are seeing stories of fans turning violent.  We love our teams, but our San Francisco sports lawyer and his team find this type of violence completely unacceptable.   Holding the perpetrators of spectator violence accountable serves the dual purposes associated with all civil injury claims – prevention of future harm and compensation for the injured. 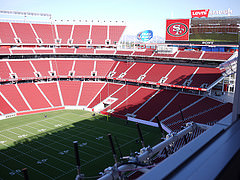 As reported by ABC7, a Vikings fan was assaulted in the parking lot of Levi’s Stadium on Monday night after the 49ers beat the Minnesota team.  A video shared on social media shows a group of 49ers fans attacking the individual as he tries to crawl away.  Police are talking to the victim and looking for witnesses, including some still-unidentified people on the video.

While it is not clear how Monday’s incident began, fans who spoke to ABC said that the incident is not indicative of 49er fans in general.  Still, the article notes, Santa Clara police have responded to two dozen reports of game-time assaults since the 49ers moved to Levi’s Stadium last year.  At least one incident has serious consequences with a man incurring a severe brain injury.

In 2008, the Center for Problem-Oriented Policing (“POP Center”), a nonprofit organization dedicated to effective police work, published a guide to Spectator Violence in Stadiums examining violence in and around stadiums and similar arenas.  The Guide states, “[s]pectator violence in stadiums has been a longstanding tradition” citing recorded incidents in ancient Greece.  Spectator violence occurs during many types of entertainment events, everything from sporting events to concerts and plays to dog shows.  The review also notes that spectator violence is comparatively rare in North America and much more common in Europe.  An article from Athletic Business titled “How to Prevent Fan Violence” suggests violence may not actually be increasing U.S. spectators , but rather technology may allow for greater awareness of events that only the immediate crowd would have known previously.

The POP Center lists six of the most common types of spectator violence (also termed “spectator aggression”): 1) Verbal such as shouting taunts; 2) Gestures, including making obscene motions or threatening signals; 3) Throwing objects like bottles or debris either at specific or random targets; 4) Swarming, from rushing a field to pushing en masse towards an entrance or exit, which can lead to injury or death by, among other causes, trampling; 5) Property destruction, including damage to the venue and/or personal property; 6) Physical acts including spitting, shoving, beating, or even intentional killings.  Critically, the Athletic Business report warns intoxication is a common aggravating factor, leading many sporting venues to cut off alcohol sales prior to the conclusion of the game.

A victim of a spectator assault (or surviving relatives in deadly incidents) may have a variety of civil claims.  The most obvious potential defendants are the perpetrators of the assault.   However, they may not have the resources to pay a resulting judgment, especially in cases of serious injury or death (this possibility is one reason the law mandates drivers carry auto insurance!).  Sometimes, the injured party may also have a claim against the venue, team, team owner, or an external security firm.  In 2014, per NBC4 Los Angeles, a court awarded Bryan Stow $18 million in a civil suit stemming from an attack in the stadium parking lot after a game.  The court found the Dodgers negligently failed to provide adequate security, holding the team and the attackers themselves liable.  An incident in 2011 led to similar allegations against the 49ers, their former stadium, a security company, and the team owner in a suit dismissed on a legal technicality that did not involve the merits of the claim (see Contra Costa Times and Law 360).  Additionally, in certain circumstances, an injured party may have a claim against the sporting league or similar organization alleging that league policies either encouraged or failed to prevent the incident.

If you have been the victim of spectator violence in Northern California, please call our San Francisco fan injury law firm.  We can help you pursue a claim for monetary damages including payment of medical bills, compensation for lost wages, and money for pain and suffering.  Most cases are handled on a contingency fee so you only pay us if you recover money.