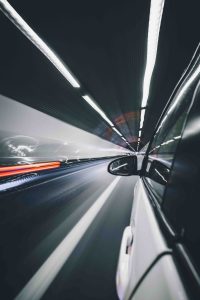 In mid-May, a pair of Mustangs raced down 25th Street in Palmdale, California, when they encountered an intersection. Because the vehicles were moving so fast, they were unable to stop. One mustang lost control after the driver slammed on the brakes. It crashed on the side of the road after it crossed through the intersection. The other Mustang was hit by a Mercedes-Benz, which was crossing the intersection. The collision pushed the Mustang into a pole that split it in two. The driver was taken to the hospital in critical condition, but is expected to recover.

Individuals who are hurt in accidents caused by other people street racing have a strong case for negligence. Drivers have a duty to drive safely, obey traffic laws, and not put other motorists and pedestrians in danger. Drag racing not only breaks California law, but it clearly puts others at risk. When a street racer caused the crash that resulted in your injuries, you may have a great deal of evidence to support receiving compensation. For more information, contact a San Francisco personal injury lawyer from the Brod Law Firm.

While it is often called street or drag racing, legislators call is a speed contest and have made it illegal to participate in one or be a spectator. Under California Vehicle Code Section 23109, you are not allowed to engage a vehicle in a speed contest on a highway or any public road. A speed contest includes any event in which one vehicle competes against another to reach a certain destination first, measured by a clock or timing device. Anyone found to be involved in a drag race will be arrested and face a misdemeanor offense. If convicted, he or she can be imprisoned for up to 90 days, fined up to $1,000, have his or her driver’s license revoked or restricted, be required to complete community service, and more. Also, his or her vehicle will be impounded for 30 days.

If you were injured by a driver who was racing another vehicle, then you may have strong evidence of that driver’s negligence. Street racing, particularly when the driver was moving far above the speed limit, is illegal and highly dangerous. It clearly creates a risk of danger that can result in a collision that causes you injury. You can move forward with an insurance claim or personal injury suit with evidence of the drag race, before the driver is convicted.

However, your attorney may advise you to wait to accept a settlement offer until the driver negotiates a plea deal or is convicted in the street contest case. This can give you more leverage to seek a greater amount of compensation. The right move for you will depend on your situation and the evidence you have of street racing without a conviction.

If you were hurt because of drag racing, do not hesitate to reach out to an experienced personal injury attorney from the Brod Law Firm at (800) 427-7020 and schedule a free consultation.