Pedal confusion and storefront crashes are two problems that may sound unusual but are unfortunately quite common and often go hand-in-hand.  As an Oakland car accident lawyer, Attorney Greg Brod helps people injured in these accidents.  As a concerned and safety-conscious member of this community, he is also dedicated to helping raise awareness about the dangers of pedal confusion, the relationship to storefront/building crashes, and ways to prevent these tragedies.

ABC7 reports that a vehicle plowed into the Walnut Creek Panda Express located on Oak Grove Road just before 5 PM on Tuesday.  A Contra Costa County Fire official told reporters that it appears the elderly driver hit the gas instead of the brake while attempting to park in front of the restaurant, causing the car to accelerate into the storefront.  The driver was taken to the hospital as a precaution but thankfully there were no serious injuries reported.

END_OF_DOCUMENT_TOKEN_TO_BE_REPLACED 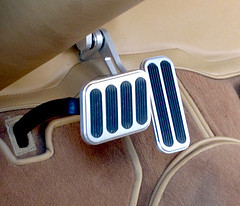 Often the most important parts of any task are also the most basic.  Drivers learn the difference between the brake and the accelerator before they even put the car in drive.  While this is a fundamental matter for any driver, pedal confusion accidents happen with alarming frequency.  Avoiding pedal errors is critical.  When accidents do happen, our San Francisco pedal confusion injury lawyer is ready to help the injured.  It is important to remember that no matter how sympathetic the defendant may be, and those involved in accidents are often good people who made one unintended mistake, those injured because of another’s actions deserve compensation.

A frightening scene unfurled at a Livermore gym early Tuesday.  The San Francisco Chronicle reports that around 6:30 A.M. an 80-year-old driver confused the accelerator and brake pedals sending her car crashing into the lobby of LifeStyleRx health club at 1119 E. Stanley Boulevard.  Livermore police told reporters that the female driver “experienced pedal confusion” while parking her Mercedes SUV.  The crash led to the death of 49-year-old Katheryn Baker, the chief financial officer of Lawrence Livermore National Laboratory, a government-owned technology company in the national security arena.  Five others were injured and taken to hospitals.  Police do not believe alcohol or drugs were factors in the accident.