While it is often a necessity and an unavoidable part of construction projects, transporting large construction equipment is fraught with danger. Drivers should be able to trust that companies will take safety seriously, respecting the rest of those travelling on our roadways. Our Oakland heavy equipment accident lawyer is committed to helping those injured when companies fail to live up to their responsibility to California citizens. 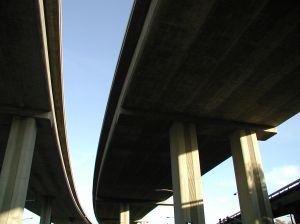 On Wednesday morning, a truck transporting a large crane collided with an overpass just south of San Pablo Dam Road on Interstate 80. As reported by the Oakland Tribune, the collision occurred around 8:30 A.M. when the crane crashed into a traffic signal and light pole before ripping into the concrete underneath a pedestrian overpass. It took crews more than an hour to clean up pieces of concrete that blocked two of the lanes on Interstate 80 westbound, backing traffic up as far as the Hilltop Drive exit in Richmond. Lane closures lasted more than eight hours. After the crash, structural engineers inspected the overpass and repair crews used plywood to reinforce the four foot-long portion of damaged roadway and prevent additional debris from tumbling onto the road. Crews also made repairs to the road surface that was damaged by the fallen pieces of concrete. Engineers need to evaluate the need for longer-term repairs, with the pedestrian overpass remaining closed until further study is concluded.

Sam Morgan, a spokesman from the California Highway Patrol, told reporters that the trucking company may not have held the permits necessary for transporting the crane. In order to transport a load taller than fourteen feet, trucking companies must obtain a special permit and use a preapproved travel route. According to Morgan, Pio’s Trucking, the El Sobrante based company responsible for transporting the crane, did not follow the requirements despite the fact that the rig carrying the crane measured about seventeen feet from the ground at its highest point. CHP will continue their investigation and then turn the findings over to Caltrans. The company may face fines and be ordered to pay the cost of the road repairs if the official findings confirm they failed to get the needed permits. The Tribune reported that a representative who answered the phone at Pio’s Trucking confirmed the company’s involvement in the accident but failed to comment further.

Thankfully, it does not appear that anyone was injured in Wednesday’s collision. Regardless, the accident is a harsh reminder of how dangerous it can be when companies transport large pieces of equipment on our roadways. When crashes do cause injury, The Brod Law Firm can help. Although a civil case is separate from any regulatory fines, the failure to obey transportation requirements can be a key piece of evidence in proving fault in civil court. In some cases, such failures may also support the award of additional punitive damages to punish a company’s absolute disregard of public safety. It is important to have a lawyer who knows California laws and regulations. Our Oakland trucking accident attorney has the experience needed to help victims recover compensation and move forward after an unexpected tragedy.