We’ve all experienced the frustration of being stuck behind a driver who is travelling significantly slower than the posted speed limits. Passing can be an important component of sharing the road. However, passing can be dangerous if not done with the utmost care, especially on two-lane roads when passing requires travelling in a lane usually dedicated to opposing traffic. Our Santa Rosa car accident attorney is committed to representing Californians when a passing accident caused by another driver’s reckless, careless, or negligent passing technique leaves innocent people injured or leaves families grieving an unexpected death.

One Dead, One Injured When Driver Loses Control While Passing Traffic on New Year’s Eve
Authorities suspect a fatal New Year’s Eve car accident stemmed from an attempt by two vehicles to pass traffic on Highway 1, according to a report in The San Francisco Chronicle. The incident occurred in west Marin County, north of Marshall, at approximately 5:30 P.M. Officer Andrew Barclay, a spokesperson for the California Highway Patrol (“CHP”), told reporters that witnesses observed two northbound vehicles crossing a double yellow line in an apparent effort to pass other traffic. As they approached a curve, one vehicle successfully merged back into the northbound lane but the second driver apparently panicked and lost control of his car. The vehicle, a Honda, spun out and flipped, landing in the waters of Marshall Creek.

Onlookers were able to help a passenger escape the Honda, but the driver was trapped until additional help arrived. The passenger incurred only minor injuries and was treated at Petaluma Valley Hospital and later released. Once freed, the driver was also transported to the hospital where doctors later pronounced him dead. Both men are from the Santa Rosa area. Officer Barclay reported that neither alcohol nor drugs appears to have played a role in the crash. 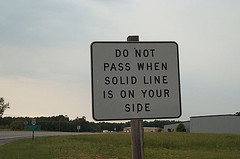 A 1994 study commissioned by the Federal Highway Safety Administration found that passing-related crashes accounted for a relatively small portion of accidents. However, an analysis of the accidents revealed that passing-related accidents tended to be somewhat more severe than other forms of traffic accidents. In all three states involved in the study, the percentage of fatal and incapacitating accidents involving passing was higher than the corresponding rate for non-passing accidents. While the reporting details and precise numbers varied among the three states, head-on collisions were less common than many might expect. Study authors suggested that passing drivers may opt for any result other than a head-on collision if trouble develops during a passing maneuver.

Holding Drivers Responsible for Negligent Passing & Other Forms of Aggressive Driving
While the FHWA study is about twenty years old, passing accidents remain dangerous. This fall, the CHP announced a focused effort to reduce the threat of accidents involving speeding and/or aggressive driving, with improper passing noted as among the common violations committed by of aggressive drivers. If a passing accident has caused you or a loved one injury, especially if that injury involves lifelong results or led to a family member’s death, call our office. As a Northern California major car accident lawyer, Attorney Brod can help you get the monetary compensation you need from the negligent driver whose actions left you and your family dealing with tragic results.