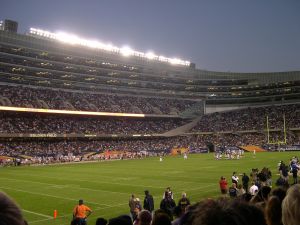 A great game, recreation and good company are usually among the highlights one looks for when attending a sporting event at a stadium. Certainly injury or even death is not something one would expect to happen in such a venue but, as we were reminded by a fan’s fatal fall at a San Francisco 49ers game Sunday, these unfortunate tragedies do occur. And an injury or loss of life suffered by someone attending a sporting event always triggers the question of exactly who is liable for the victim’s misfortune.

Ill-Fated 49ers Fan Was Traversing Pedestrian Walkway
As reported by the San Francisco Chronicle, a 32-year-old man identified as Kevin Hayes of Hayward was walking with his brother outside Candlestick Park before the kickoff Sunday between the 49ers and the Green Bay Packers when he fell from a pedestrian walkway and died from his injuries suffered in the fall. Witnesses said that Hayes appeared to be intoxicated when he fell from the Jamestown Avenue overpass. A toxicology report is pending from the medical examiner’s office.

Sad to say, the death at the 49ers season opener was far from the only fatality that has occurred in recent years at sporting events in the United States. Indeed, according to the Institute for the Study of Sports Incidents, the fatality at Candlestick was one of more than two dozen cases of fans falling at stadiums in this country during the last 10 years. Only last month, a man fell to his death from the upper level of Atlanta’s Turner Field while watching the Atlanta Braves play the Philadelphia Phillies. And one of the more high-profile such incidents occurred in July 2011 when a 39-year-old firefighter fell to his death while attempting to catch a ball that star outfielder Josh Hamilton tossed to him at a Texas Rangers game in Arlington, Texas. In that tragedy, the victim’s 6-year-old son witnessed his father’s demise.

Reasonable Care Required for Safety of Visitors to Sports Events
In all cases involving the injury or death of someone attending a sporting event, the central legal issue raised that is important in determining who is responsible is one called premises liability. The legal theory starts with the premise that when someone enters your property they have a reasonable expectation of not suffering an injury or death. Thus, the property owner has premises liability and is responsible for maintaining a relatively safe environment. Fans attending sporting events are included among the invitees, guests and licensees who are present at a stadium at the consent of the owner and should expect the stadium owner to exercise reasonable care for the safety of such visitors. The determination of whether a stadium owner or other property owner has met the required standard of reasonableness toward fans or other invitees revolves around four main factors: 1) the circumstances under which the visitor entered the property; 2) the foreseeability of the incident that occurred; 3) the purpose or use to which the property is put and; 4) the reasonableness of the property owner/possessor’s attempt to repair a dangerous condition or to adequately warn those who visit the property.