Vacation – just the word alone can bring a smile to your face and even release a tiny bit of that tension we all seem to carry in our shoulders and neck these days.  We love our work at The Brod Law Firm, but there’s still something lovely about the moment we turn on our “away messages” (of course, we always have coverage plans in place so our client service is seamless and new clients can always reach someone who can help)!  Still, as illustrated by last week’s tragedy in Seattle, vacation is not without its dangers.  Vacation accidents can be a matter of time and place, a “regular” accident that happens to occur during a trip, or they can be more directly tied to the trip itself, such as an accident involving tourist-oriented activities or other recreational endeavors.  When visitors to the Bay Area, including tourists injured in Sonoma as well as San Francisco or Oakland, are hurt due to the actions or inactions of another, our San Francisco vacation accident law firm

On Thursday September 24, a duck boat tour in Seattle ended tragically leaving four dead and dozens injured.  According to the San Francisco Chronicle, the duck boat was carrying a group from North Seattle College across the Aurora Bridge when the amphibious vehicle suddenly swerved and crashed into a charter bus. The crash killed four international students.  A woman from Fremont who suffered a broken collarbone was among the many injured in the collision.

(Update: After this article was written, a fifth person died from injuries sustained in the accident.  As of this update, NBC reported that five others remained in intensive care.)

The National Transportation Safety Board (“NTSB”) has begun investigating last week’s crash, but the Chronicle notes that many were already calling changes to the use of the amphibious crafts prior to the most recent tragedy.  While some are asking for better oversight, others are calling a ban on using the military-style vehicles as tourist conveyances.  Those opponents say the vehicles were originally built for the battlefield, specifically transporting troops from water to land, not narrow and crowded city streets.  Other safety advocates have focused on the fact that 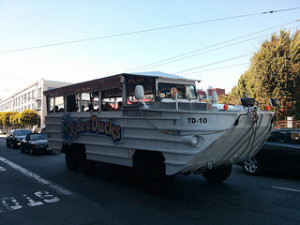 many duck boat operators are trying to navigate the roads and the waters while also acting as an energetic, interactive tour guide (Note: Earlier this year, SFGate.com reported on a new ordinance requiring most San Francisco tour bus companies use a second employee to narrate while the driver focuses on driving.)

Critics of both sort point to the difficult safety record and the Chronicle article mentions several serious duck boat accidents.  In 2010, two students died near Philadelphia after a tugboat pulling a barge crashed into a stalled duck boat, ultimately sinking the tourist-packed vessel.  Last week wasn’t Seattle’s first duck boat accident either.  There, in 2011, a duck boat ran into and dragged a motorcycle rider after coming up behind him at a light.  Looking back further, the NTSB blamed inadequate maintenance for the sinking of a duck boat in Alabama during 1999, an incident that claimed thirteen lives.

We love our region and love sharing it.  As a San Francisco tourist injury lawyer, Attorney Greg Brod is concerned about the safety of visitors to the Bay Area whether they are riding a duck boat or enjoying anything else our city has to offer.  Vacation injuries take many forms including rental car accidents, serious cases of food poisoning, and injuries stemming from defective rented sporting equipment.

Although there are exceptions, usually a plaintiff files an injury lawsuit where the injury occurred.  Our team understands that this can be difficult for the countless people hurt while visiting our region for business and recreation each year, especially after a serious injury or loss.  We work hard to limit the number of times you have to return to the area to pursue your legal rights.  In some cases, we can even resolve the entire matter without the need for an out-of-town client to return at all (or at least not for such an unenjoyable reason as pursuing an injury claim!).  Call to arrange an in-person or telephonic consultation.

(Image by Mark Hogan; pictured example of duck boat was not involved in crash)