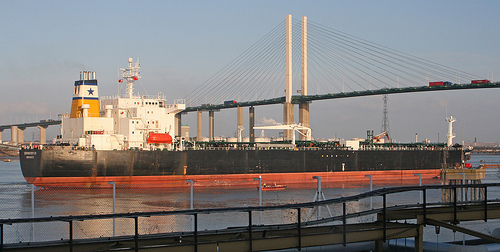 Along with the rest of the community, our San Francisco and Oakland accident law team has been watching the unfolding story of the oil tanker that collided with a Bay Bridge tower last week. The accident could have been much worse. No one was hurt but it could have led to numerous injuries, even deaths, and could have resulted in an environmental catastrophe that might have harmed the ecosystem and made thousands ill. An oil tanker crash is a serious incident and we are following the news of the recent crash in the hopes the lessons help prevent another crash with more dire results.

Oil Tanker Collides with Bay Bridge Tower
Among the information gleaned by The Oakland Tribune and other sources from a series of interviews held Monday, the pilot of the 752-foot oil tanker changed course just before the crash. It is unclear why Guy Kleess, the 61 year-old pilot, made the change, positioning the vessel to sail between a different set of towers than he had originally targeted. Kleess is an experienced operator who has sailed professionally for 36 years and has made 1,200 trips with large ships in the Bay, including during his years as an Exxon oil tanker captain. His shift in course came at a time of increasing fog and strong currents as the Overseas Reymar headed out to sea. Captain Peter McIssac, president of the San Francisco Bar Pilots, noted the move to go between the D and E towers rather than the planned C and D route put the ship at a tricky angle. The ship did not make the shift successfully, sideswiping tower E at 11:18 a.m. on January 7. The impact left a large scrape on the hull and caused damage amounting to several million dollars to both the ship and the bridge.

Overall, Monday’s conference seems to suggest that pilot error caused the crash but that thickening fog, strong currents, and a faulty beacon also factored into the accident. Reports indicate the accident happened during a state termed “maximum current” when the current accelerates due to falling tides causing conditions akin to black ice on pavement. Also, the post-accident investigation revealed that a radar beacon that points to the midpoint between towers C and D was not working. Those involved say it is premature to say whether the broken beacon may have caused confusion leading to the sudden change in course. The reason for Kleess’s last minute action is a significant part of the investigation. Coast Guard officials note that Kleess, along with rest of the crew, passed drug and alcohol tests. An attorney for Kleess also dismissed the claim that fatigue was a factor.

Safety Concerns in Bay Shipping Industry
The incident is raising new questions about the safety of oil tankers in the bay. In a 2007 incident, the Cosco Busan collided with the bridge’s D tower, causing 53,000 gallons of bunker fuel to spill into San Francisco Bay and oiling 69 miles of shoreline. Thankfully, the Overseas Reymar has just unloaded its millions of gallons of oil the night prior at the Shell refinery in Martinez and therefore was empty at the time of the recent crash. Environmentalists are expressing concern that, had the timing been different, the accident could have led to an ecological disaster. Representatives from the shipping industry, the Coast Guard, and marine safety officials have also voiced safety concerns.

Both the Coast Guard and the NTSB are investigating the tanker crash in order to identify all factors that contributed to the accident. Although this process may take months, we hope they will take care and that they will use the results to help prevent future accidents in the Bay and other area waterways. Investigations into shipping accidents can improve safety and also provide useful evidence for litigation stemming from similar incidents. While this incident did not cause injury, our San Francisco waterway accident lawyer is prepared to help in cases where shipping or boating accidents cause serious injury to those on board or to bystanders. As a California oil spill lawyer, Attorney Brod also has the knowledge and experience needed to help those affected by the environmental impact of a toxic spill.