All car crashes are frightening, but rollovers are particularly terrifying.  Rollovers are particularly violent and particularly deadly.  They leave occupants feeling particularly helpless, a feeling that often persists long after the event itself.  When a rollover crash is caused by someone’s negligent or wrongful actions and it results in death or injury of another, our Santa Rosa rollover crash attorney is prepared to file a wrongful death or personal injury claim on behalf of the injured and/or surviving relatives.  These claims seek to hold the at-fault party accountable and provide much needed compensation to those impacted by the terrifying event.

The Press Democrat reports that a 35 year-old woman died in a Lake County rollover crash on Sunday.  CHP investigators say the woman was a passenger in a 1996 Honda Accord that was travelling south on Highway 39 near the Hill Road undercrossing when the vehicle started to drift towards the dirt median.  Apparently, the driver overcorrected and lost control of the vehicle which proceeded to skid across the southbound lanes before hitting a curb and dirt embankment.  The force of the impact caused the Accord to roll and slide off the road, landing on its roof on the adjoining frontage road.

Both the passenger and the driver were wearing seatbelts.  The passenger was pronounced dead at the scene and the driver was taken by air to Santa Rosa Memorial Hospital with injuries not believed to be life threatening.  Police do not think alcohol was a factor. 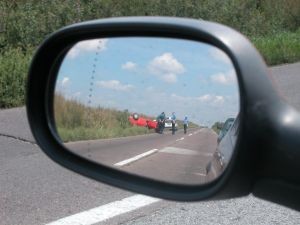 Rollovers are among the deadliest of vehicle crashes.  According to the National Highway Traffic Safety Administration’s (“NHTSA”) Safercar.gov website, rollover accidents claimed 7,600 lives in 2010.  While rollovers accounted for only 2.1% of vehicle crashes in 2010, almost 35% of crash fatalities in 2010 involved a rollover incident.

The vast majority, about 95%, of single-vehicle rollovers are ‘tripped’ meaning the vehicle leaves the road and either hits an object or a changed surface that causes a high-tipping force to be applied to the tires and leads to the roll.  Fewer than 5% of rollover accidents are un-tripped with those crashes usually involving high-speed evasive maneuvers and top-heavy vehicles.

Although some people think of rollovers in relation to certain vehicle types, the NHTSA suggests rollovers are usually a matter of driver behavior, road conditions, and environmental factors.  Vehicle type does matter and narrow, tall vehicles are more likely to roll due to their higher center of gravity, but technology has diminished the role vehicle type plays in rollover accidents.

What matters more?  Speeding is a major factor with 40% of deadly rollover crashes involving excessive speed and nearly ¾ of deadly rollovers occurring where the speed limit was set at 55mph or higher.  Almost half of fatal rollovers involve alcohol.  Location also matters with rural roads accounting for 75% of rollover accidents due to high speed limits and undivided roadways.  Nearly 85% of fatal rollovers occur in the course of single-vehicle crashes.

If you were injured in the course of a rollover crash caused by someone else’s negligence or you lost a close relative under similar circumstances, you may have a legal claim.  We are a car accident injury law firm in Santa Rosa, San Francisco, and Oakland serving all of Northern California.  Let us put our experience to work for you and help you “get back on your feet” after a crash that swept you off them!