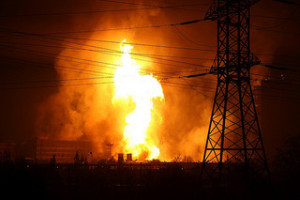 Authorities believe that the explosion occurred after a tractor-trailer punctured a 12-inch Pacific Gas and Electric (“PG&E”) natural gas pipeline.  A public works employee was operating the tractor, reinforcing a berm behind shooting range targets while deputies practiced nearby and a more than a dozen inmates dug bullets out of the berm.  According to a PG&E spokesperson, the company had not been notified of any digging in the area.  As detailed on PG&E’s Call Before You Dig website, anyone digging outside must receive clearance from local utility companies.  However, a representative from the Fresno County Sheriff’s Office suggested that the front-loader may have only been scraping the ground when the explosion occurred.

The explosion might have taken a larger toll had it not been for the deputies who quickly sprung into action.  Likewise, more bystanders might have been injured or even killed had the explosion occurred on a bustling city block or a residential neighborhood instead of an area surrounded by grasslands.  Amazingly, the tractor driver was able to walk to an ambulance for treatment.  Still, at least one person incurred injuries serious enough that he had to be airlifted to a nearby hospital.  Fifteen water-carrying vehicles responded to the explosion.  About 200 feet from the epicenter, intense heat melted plastic garbage cans into something that more closely resembled trash can lids than the receptacles themselves.  A nearby rail line was also damaged and officials closed Highway 99 in both directions for at least two hours.

Like those affected by the 2011 pipeline explosion in San Bruno, those impacted by Friday’s explosion will never forget the terrifying blast.  Perhaps surprisingly, pipeline explosions are not all that uncommon.  The Pipeline and Hazardous Materials Safety Administration tracks pipeline accidents, deeming an incident “significant” if any of the following occur (excluding incidents caused by a nearby fire): 1) Death or an injury requiring in-patient hospitalization; 2) Expenses exceeding $50,000 (in 1984 dollars); 3) Five or more barrels of highly volatile liquids or 50 barrels or more of other liquids are released; or 4) A liquid release results in an explosion or unintentional fire.  Over the past 20 years, the number of significant pipeline incidents per year has held relatively steady with an average of 280 incidents per year between 1995 and 2014.  On average, these incidents resulted in 18 deaths and 68 injuries per year for a total of 360 lives lost and 1,368 people injured over the two decade span.  Twenty-seven deaths and 98 injuries resulted from 375 significant pipeline incidents in California during the 20 year period.

In addition to compensating the injured and grieving, civil suits can help prevent future tragedies.  Sometimes it takes hitting them in the wallet to force companies to prioritize safety.  In some cases, a civil verdict or settlement may require prospective changes in addition to (essentially retrospective, even when future costs/suffering are included) payments.

Attorney Greg Brod has the knowledge and experience to act as a legal advocate for the injured and grieving following pipeline accidents.  As a pipeline injury law firm in San Francisco, Santa Rosa, and Oakland, The Brod Law Firm works to compensate victims and prevent future pipeline accidents.  In addition to serving all of Northern California, we can also work with local counterparts to represent pipeline explosion victims in Central California.  Call to arrange a free consultation.